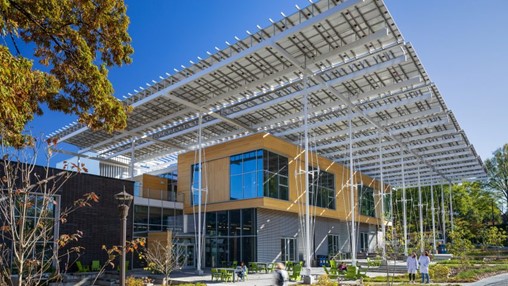 US firms Miller Hull Partnership and Lord Aeck Sargent have designed a highly sustainable building at Georgia Tech university that generates more electricity and recycles more water than it uses. The project – officially called The Kendeda Building for Innovative Sustainable Design – is located at the Georgia Institute of Technology, a public research university in central Atlanta. The educational building was designed by Seattle's Miller Hull Partnership in collaboration with local firm Lord Aeck Sargent, which was purchased by tech startup Katerra in 2018. The project was backed by the Kendeda Fund, a private family foundation that supports a range of social and environmental initiatives. Skanska served as the general contractor. The facility recently earned certification from the Seattle-based International Living Future Institute under its Living Building Challenge – one of the most rigorous green-building certification programmes in the world. The facility is considered to be a "regenerative building." "Regenerative buildings create more resources than they use, including energy and water," the team said. "The project's goal is to support the educational mission of Georgia Tech while transforming the architecture, engineering and construction industry in the Southeast US by advancing regenerative building and innovation." The facility – which totals 47,000 square feet (4,366 square metres) – holds a range of spaces for students and faculty. These include a design studio, two large classrooms, several laboratories, a seminar room, an auditorium and office space. There also is a rooftop garden with an apiary and pollinator garden. Certain areas of the building are open to the public for special events. While designing the facility, the team took inspiration from vernacular architecture – in particular, large porches that are commonly found on Southern homes. "The project reimagines this regionally ubiquitous architectural device for the civic scale of the campus," said Miller Hull. Rectangular in plan, the building is topped with a giant white canopy supported by steel columns. On the west elevation, the roof extends 40 feet (12 metres) to form a large, shaded area below with steps and seating. In addition to providing shade, the canopy generates electricity. Its 900-plus solar panels form a 330-kilowatt array that produces enough power to exceed the building's energy needs. For the exterior cladding, the team incorporated a mix of accoya wood, metal, glass and recycled masonry. The foundation walls are made of concrete. Mass timber was used for the structural system due to it having a smaller embodied carbon footprint compared to concrete and steel, the team said. In large-span areas of the building, the team used glue-laminated trusses with steel bottom chords. "This hybrid approach reduces the quantity of wood required while making routing of building services more efficient," the team said. For the structural decking, nail-laminated timber panels were made off-site and craned into place. A local nonprofit organisation, Lifecycle Building Center, sourced the lumber from discarded movie sets in Georgia. Structural elements, along with mechanical systems, were left exposed so they could serve as a teaching tool. Salvaged and recycled materials are found throughout the facility. For instance, stairs in the building's atrium are made of lumber off-cuts, and countertops and benches are made of storm-felled trees. Water recycling is also part of the building's sustainable design. Rainwater is captured, treated and used in sinks, showers and drinking fountains. In turn, that greywater is channelled to a constructed wetland, where it is treated and used to support vegetation. The facility is also fitted with composting toilets, which nearly eliminate the use of potable water. The human waste is turned into fertilizer that is used off-site. The building recently earned its Living Building Challenge (LBC) certification following a year-long assessment, in which it needed to prove it is net-positive for energy and water usage. "It generates more energy from onsite renewable sources than it uses," the team said. "The building also collects and treats more rainwater onsite than it uses for all purposes, including for drinking." The LBC programme evaluates buildings in seven categories – place, water, energy, health and happiness, materials, equity and beauty. The Kendeda Building is the 28th building in the world to achieve LBC certification and the first in Georgia. The state's warm and humid climate poses a particular challenge when it comes to energy efficiency, the team said. "In spite of this, over the performance period the building generated 225 per cent of the energy needed to power all of its electrical systems from solar panels on its roof," the team said. "It also collected, treated, and infiltrated 15 times the amount of water needed for building functions." Other American projects that are designed to meet the LBC standards include the wood-clad Frick Environmental Center in Pittsburgh, designed by Bohlin Cywinski Jackson. It achieved certification in 2018. Photography is by Jonathan Hillyer and Gregg Willett. Project credits: Design architect: The Miller Hull Partnership, LLP Collaborating and prime architect: Lord Aeck Sargent, a Katerra Company Contractor: Skanska USA Landscape architect: Andropogon Civil engineer: Long Engineering Mechanical, electrical and plumbing engineer: PAE and Newcomb & Boyd Structural engineer: Uzun & Case Greywater systems: Biohabitats