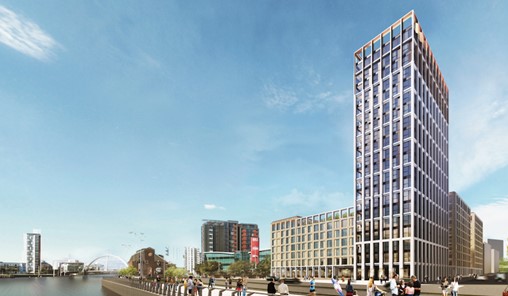 Graham has been named contractor for Platform’s £100m build to rent project on the banks of the Clyde. The delayed 498-apartment development in Glasgow’s Finnieston district consists of four blocks of varying height, including a 20- storey tower. It occupies a landmark riverside site close to the city centre which has lain vacant since the departure of the Daily Record newspaper in 2000. Graham is currently onsite and the project is scheduled to complete in 2023 – two years after the original target. Resident facilities include a rooftop garden, lounges, games rooms, gym, cycle club & café, roof terraces, and a co-working commercial area with cafe. Detailed planning permission was granted in January 2019 and work was expected to begin that year with completion this year. Gary Holmes, regional managing director for Graham’s duilding division said: “Private rental developments are again increasing in popularity across the UK, feeding a growing appetite of those people who want flexible, sociable and cost-effective living, and this project further bolsters our strong position in the residential sector.” Matt Willcock, development director at Platform said “The building will not only help redevelop the local area but will provide much needed housing to cope with high demand. BTR is a new, upward trend that offers high-quality rented accommodation at competitive prices for a wide-ranging demographic.” Designed with Glasgow-based architects Keppie, the development forms part of a wider masterplan at the Clydeside Central Quay area. Build to Rent has, alongside the rest of the new build sector, endured difficult times during the COVID-19 pandemic. In the five quarters since the pandemic started build to rent completions across the UK as a whole dropped by 11%, from 16,055 to 14,267, according to data from Ascend Properties. In March Graham was awarded the £79.5m construction contract for the first opening road bridge over the River Clyde. The twin-leaf swing bridge will be for vehicles, cyclists and pedestrians crossing between Renfrew and the boundary between Glasgow and West Dunbartonshire. The project, which will create new connections into Advanced Manufacturing Innovation District Scotland (AMIDS), is jointly funded by the UK and Scottish governments through the £1.13bn Glasgow City Region city deal. Share The News