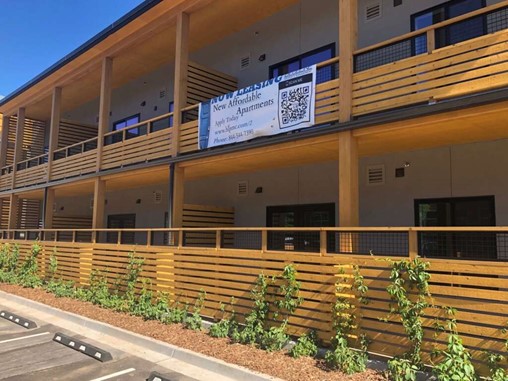 A banner hanging on the Red Hill Lofts invites applicants for the affordable housing units. About 150 applications have been received so far. A common area separates the two main buildings of the new Red Hill Lofts affordable housing project in Carbondale. Scott Condon/The Aspen Times The Red Hill Lofts affordable housing project in Carbondale opens this month. The namesake geologic feature is in the background. Scott Condon/The Aspen Times A common area separates the two main buildings of the new Red Hill Lofts affordable housing project in Carbondale. Scott Condon/The Aspen Times Consider it a blast from the past. A little-known nonprofit organization that built the Hunter Longhouse affordable-housing project in Aspen 40 years ago just completed its next project in Carbondale. Aspen Pitkin Employee Housing Inc. will provide relief for 30 lucky households this month with its Red Hill Lofts affordable housing project. “We’re really targeting folks on the lower end” of the household income spectrum, said Sheri Sanzone, executive director of the nonprofit. “We expect to be fully occupied by the end of June.” All selected tenants will have household incomes that are 50% or lower of the area median income. Rental assistance vouchers are available on 12 units that will go to households at 30% of area median income. There are 14 studios, 12 one-bedroom units and four two-bedroom units in the complex. The studios will rent starting at $706 per month; the one-bedrooms starting at $751; and the two-bedroom units starting at $892, according to its website. People who work in Carbondale and the immediate surrounding area have the highest priority. At those prices, the units are proving extremely popular. Sanzone said there have been approximately 150 applicants for the 30 units so far. The design is intended to minimize utility bills, as well. They were built to be energy efficient and they are prepped for solar panels on the roof, with help from the Community Office for Resource Efficiency. The goal is to add panels by the end of the year. The project also has electric heating and all-electric appliances. Between the solar panels and the energy company’s growing portfolio of renewable energy sources, the complex will reduce its carbon footprint with time. Sanzone said the Red Hill Lofts were built with the Enterprise Green Communities criteria, which are designed to transform the quality of affordable housing in America. There are raised garden beds for use by tenants and ample storage for toys that mountain residents tend to accumulate. “I think they’re very livable,” Sanzone said. The lofts at 2655 Delores Way are divided into two two-story buildings separated by a common area that has bike repair stations and gas grills. The north-facing units have views of the namesake Red Hill and the open spaces at the Colorado Rocky Mountain School campus are visible from the site. Wayne Stryker, president of Aspen Pitkin Employee Housing Inc.’s board of directors, said the site is ideal because it is within half a mile of the new City Market grocery, even closer to the Carbondale transit station and has a branch that connects to the Rio Grande and other trails in town. Several prominent upper valley residents, including Dr. Bob Oden, writer Herman Edel and attorney Bill Clark and businessman Klaus Christ founded Aspen Pitkin Employee Housing Inc. in 1978. Housing advocate Harry Truscott helped guide the organization in its formative years. The organization built Hunter Longhouse in Aspen in 1981 and later added five residences to create a total of 33 affordable-housing units. The project has helped numerous people gain a toehold in Aspen and allowed many people to maintain a presence in town. It took roughly 40 years for Aspen Pitkin Employee Housing Inc. to construct another project. “There’s been a ton of stuff but not anything that came out of the ground,” Stryker said. For instance, the organization helped plan and design other projects that developers then stepped in to build. The organization was able to pursue another project when it paid off bonds for Hunter Longhouse in the mid-2010s and started building up its cash reserve through rent revenues. It still operates and maintains Hunter Longhouse. Stryker and Sanzone said collaborations were the key to building Red Hill Lofts. Aspen Pitkin Employee Housing Inc. had an opportunity to buy vacant land in 2017 for $800,000. “We felt it was the right price,” Stryker said. APEHI pursued tax credits to raise funds needed to build Red Hill Lofts. It got turned down in 2018 but was approved by the Colorado Housing and Finance Authority in 2019. APEHI enlisted two consulting firm, BlueLine Development and RCH Jones Consulting, to steer it through financing issues. The town of Carbondale was also supportive of the project, and Mayor Dan Richardson spoke on the project’s behalf during an interview for the tax credits. Once tax credits are awarded, they can be sold to cover some or all of the construction cost. FCI Constructors built the lofts. BlueLine Property Management is helping oversee the residences. Sanzone said Red Hill Lofts and RealAmerica’s Roaring Fork Apartments in Basalt show that affordable housing can still be built in the Roaring Fork Valley despite soaring property values. RealAmerica was among the first entities in the Roaring Fork Valley to earn tax credits. “People felt the Roaring Fork Valley wouldn’t be competitive with other parts of the state,” Sanzone said, citing the valley’s wealth and the success of the Aspen and Pitkin County subsidized housing program. Many of APEHI’s board members have been with the organization for 20 or more years, so it was exciting for them to see a project go vertical. “They’re starting to think, ‘What is the next project?’” Sanzone said.