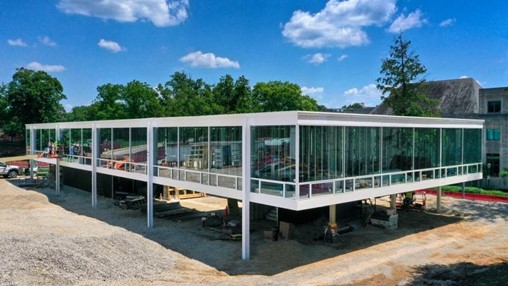 A building designed by Mies van der Rohe nearly 70 years ago is under construction at Indiana University in the USA, over 50 years after the 20th-century architect's death. The steel and glass two-storey building is being built as part of the Eskenazi School of Art, Architecture + Design on the university's Bloomington campus. Architecture firm Thomas Phifer and Partners is overseeing the project and adapted Van der Rohe's 1950s design for contemporary use. Called the Mies Building for the Eskenazi School of Art, Architecture + Design, the two-storey building will encompass 10,000 square feet (929 square metres). Its rectangular form will be 60 foot wide (18 metres) and 140 foot long (43 metres) with slim white-painted steel frames holding 10-foot-wide (three-metres) panes of glass. The lower level will mainly open to the air at the sides, with a square courtyard in the centre that rises up to the first floor. Van der Rohe, one of the 20th century's best known modernist architects who designed the Seagram Tower and the Barcelona Pavilion, drew up the plans in 1952 for Indiana University's (IU) Alpha Theta chapter of Pi Lambda Phi. The project was abandoned and the unbuilt design was forgotten about for decades until former IU student and fraternity member Sidney Eskenazi told IU president Michael A McRobbie about the drawings. Van der Rohe's original documents detailing the plans from the building were then located in the archives of the Museum of Modern Art (MoMA) in New York and the Art Institute of Chicago. The architect had designed the university building at the same time he was working on his well-known residential project Farnsworth House and the IU facility shares many similarities including the white steel frame and the glazed perimeter walls. "As someone who worked with my grandfather Mies van der Rohe since 1957, I thought I knew all the projects he ever worked on," said the architect's grandson Dirk Lohan. "But I never heard about this project until IU contacted me about its wish to build this 70-year-old design. After contemplating the request, I and the three other grandchildren concluded this would indeed be a wonderful assertion of Mies's significance as an architect," he added. "I am convinced that Mies van der Rohe, who died over 50 years ago, would have been pleased to see his iconic edifice ultimately being born." The Mies Building for the Eskenazi School of Art, Architecture + Design will open later in 2021. Van der Rohe, who died in 1969, is one of the world's best-known architects. A pioneer of modernism, he was the third and final director of the Bauhaus until he left Germany for America to escape the Nazis. More buildings by well-known architects that weren't built until long after the original designer's death include Charles Rennie Mackintosh's House for an Art Lover in Scotland and a house on an island in Lake Mahopac, New York, by Frank Lloyd Wright. The photographs are by Hadley Fruits courtesy of the Eskenazi School of Art, Architecture + Design. Dezeen Showroom: vertical wood slats create visual intrigue with the Koan sliding door, designed by Kokaistudios for Lualdi to suit a range of interiors. Koan is a configurable system of sliding and fixed panels, combining glass, metal and wood in a design that partially screens the room beyond. Lualdi describes the doors as creating a "scenographic view of the space beyond", while the design can suit environments ranging from the contemporary to classic. "Koan combines the brightness of precious glass and metal finishes with the warmth of wood, creating a perfect cohesion of technology and tradition," said Lualdi. Koan incorporates an integrated vertical handle, and sits on a track with an advanced decelerating system to absorb shock. Koan's glass can be ordered in satin, transparent or reflective finishes, with a bronze, grey or clear tint. The wood options are oak or walnut, with an additional range of dark stains for the oak, while the aluminium can have a matt black or white, bronze, brushed or natural finish. About Dezeen Showroom: Dezeen Showroom offers an affordable space for brands to launch new products and showcase their designers and projects to Dezeen's huge global audience. For more details email showroom@dezeen.com. Dezeen Showroom is an example of partnership content on Dezeen. Find out more about partnership content here.