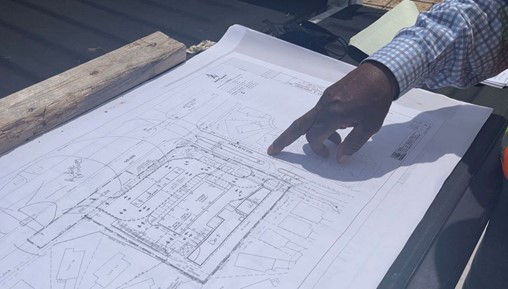 ELGIN, Texas — A gas service station is being built along U.S. Highway 290 near the Elm Creek neighborhood just as even more homes are being developed in a neighboring subdivision. That has neighbors sounding off about the construction project, calling the gas station a traffic safety risk. Among those concerned about the development is Arthur Sampson who has lived in the neighborhood in Elgin for about five years. “This is the first site that we have encountered in this area right now, without us ever being notified,” he said, pointing out other projects have been completed with the community's knowledge and input. “The traffic that is coming into the business is going to be coming into the subdivision,” he laments. Sampson has some 40 years of experience in infrastructure engineering under his belt and he’s not happy with the layout plan for the site. The service station is located on the intersection of Red Elm Parkway and Highway 290, a 60 mph freeway with a divided center to split eastbound and westbound traffic. The current design only allows for an entrance along the highway but to exit, vehicles will only be able to get out on Red Elm Parkway which happens to be the entrance to the subdivision. Texas Department of Transportation officials tell Spectrum News 1 they’ve reviewed the project but concluded that the nearby intersection is too close to allow traffic to exit back out onto Highway 290. Allowing that traffic flow could pose a traffic risk for vehicles exiting the service station. Sampson says there are tools at TxDOT’s disposal which can help, including delineators among other things. “We can use signage stating that the traffic has to keep to the right when they exit it out to get through the red light,” he said. His concern isn’t just the disruption to the flow of traffic but the wide turns in the neighborhood street as tankers get in and out of the station which he fears could devastate the median. The construction of the service station also meant a redesign of the sidewalk which will now be redirected along an incline. Travis County officials have not yet responded to a request for comment for the story, but emails provided to Spectrum News 1 by Sampson between himself and county leaders show that the redesigned sidewalk will meet ADA standards. Among the list of grievances, Sampson points out curb damage by contractors doing construction work. “They've already run over the curb and busted the curb, this wasn't like this,” he said. His concern is what might happen when the site actually opens and gas tankers begin taking those turns on a more regular basis, or worse. Property damage is one thing, he says, but physical safety is even more precious. “We just want the citizens of Red Elm Creek neighborhood association to be heard, avoid having a bad accident, or run into a big commercial truck," he said.