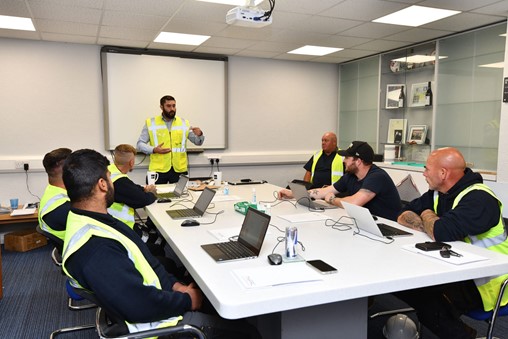 As RoofCERT works with CITB to find an accreditation scheme to demonstrate competency of operatives and supervisors within the rainscreen cladding sector, an initial pilot, which focused on a trained supervisor model, took place at SPV Group’s training centre and has produced ‘positive’ results. Over the past twelve months, RoofCERT says it has been working on a CITB-funded project with the objective of providing a ‘proof of concept’ for an accreditation scheme that has the ability to significantly reduce industry failure rates on inspections by improving quality. RoofCERT has reported that the first pilot for this project took place at the SPV Group’s training centre in Walsall in June, to test the theory that a trained supervisor model could lead to an improvement in the quality and safety of rainscreen cladding installation. A new rainscreen cladding training course was developed as part of the pilot and the team say this has shown initial evidence of an eleven per cent improvement in the knowledge and understanding of the cladding operatives that took part. This, they say, provides early positive evidence to support the concept of an accreditation scheme for trained supervisors in this sector. The operatives were said to be tested initially through a short multiple-choice knowledge test consisting of 35 questions to assess their current knowledge and understanding of rainscreen cladding. This was then followed by a mixture of classroom and practical training over two and a half days which included behavioural modules in addition to technical instruction. During the training, the trainer assessed each operative and provided feedback on areas where they performed the strongest, as well as identifying areas in need of improvement. At the end of the training the operatives then took a follow-up test to see if their knowledge had improved. Further to this, RoofCERT has reported that of the five operatives who took the course, all are said to have agreed or strongly agreed that not only did they have a better understanding of rainscreen systems, but that the practical training they received had improved their installation skills, and all the operatives rated the course five stars out of five and would recommend it to others. It has been reported that the assessors will now follow up with SPV at regular intervals, as well as undertaking an on-site assessment to identify any improvements seen as a result of the training, and to see if this training has transferred to other operatives through improved supervision and leadership. The team at RoofCERT say they will look to undertake a number of further pilots with other early adopter cladding companies over the coming weeks to gather further evidence before reporting its findings and recommendations to CITB, with a view to progressing to the next phase of the project to develop an accreditation scheme for rainscreen cladding supervisors in collaboration with the CITB and other Industry stakeholders. Commenting on the pilot, NFRC Group Chief Executive James Talman (above, right) said: “Being able to demonstrate the competency of operatives and supervisors working on all buildings, but particularly high-risk buildings, is critical to improving safety and quality. That is why we are working in collaboration with CITB and the industry to undertake initial pilots on what model would work best in achieving this outcome for the rainscreen cladding industry.” He continued: “We are pleased that the initial evidence from this pilot is positive. All the operatives who took part saw a demonstrable increase in their knowledge of rainscreen cladding as a result of the training, as well as an improvement in their practical skills. We will now undertake further pilots to keep testing and refining this model and ensure we have robust data before we pass on our findings and recommendations to the CITB.” He concluded: “We would like to thank everyone who made this pilot possible, in particular SPV Group who hosted and provided the operatives for the day, Keith Wiltshire who led the training supported by the Siderise technical team and Academy Consultancy & Design, as well as Ash & Lacy Construction, CY Associates, EJOT, FixFast, Fixing Point, Rockwool and Siderise for providing materials.” Kate Whatley, Commercial Director of SPV Group, said: “SPV were delighted to support the delivery of the rainscreen supervisors pilot training course in our training centre and also place five of our valued supervisors on the course. With much of our work involving large-scale building envelope schemes and being involved with many of the building safety fund projects, this course was excellent at ensuring that our supervisors’ knowledge was fully up-to-date with all current regulations and guidance.” She added: “We were honoured to be part of the pilot and to be able to help shape the course to ensure it is fit for purpose and ready to be rolled out to the industry. Our supervisors all commented how interesting and useful the course was and learnt a lot over the two days’ training. I wouldn’t hesitate in recommending this course to those in the cladding sector.” Steve Walker, Head of Training and Development Strategy for CITB, said: “CITB is supporting the development of a new competence scheme for building cladding. We are working with the industry to agree how its competence models can keep pace with changes in the sector, increasing qualification take-up and delivering a more professional sector for the future.” www.roofcert.co.uk