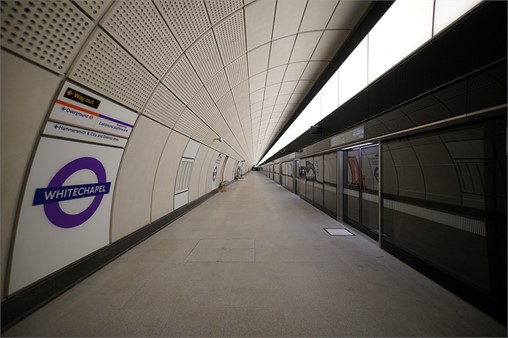 Main contractor BBMV (the Balfour Beatty, Morgan Sindall, VINCI Construction joint venture) has completed construction of the Crossrail station at Whitechapel in east London A new ticket hall and lifts have opened for customers at Whitechapel station as the original entrance on Whitechapel Road has reopened with the addition of step-free access to London Underground and platforms. The new stations on the Elizabeth line are much larger than many other central London stations due to the length of the new trains, which are more than 200 metres long. It is the seventh Elizabeth line central section station to transfer to TfL. As well as the renovated Victorian entrance from 1876 being cleaned, repaired and opened up to provide more space, local access has been improved with a new public footway directly through the station connecting Whitechapel Road to a new entrance on Durward Street. A significant challenge At Whitechapel, the London Underground actually passes above the London Overground, so building above both operational railways and the Victorian infrastructure was a significant challenge for Crossrail and its main contractor BBMV, while also constructing the Elizabeth line below. Thousands of hours were needed to undertake the works, including overnight when services were not in operation and during some essential closures of the network. New lifts have been installed at the station providing step-free access to the District and Hammersmith & City lines as well as London Overground platforms. The area between the London Underground platforms has been resurfaced and hoardings removed, which has opened up the space on the platforms providing more room for customers to circulate. There are also new benches and help points. New escalators have also been built at the station down to the Elizabeth line, and step-free access from the street to Elizabeth line trains will be available at Whitechapel when it opens in the first half of 2022. There are four new ticket vending machines as well as customer information screens providing a positive customer experience for those using the station. Boosting biodiversity in the city centre Mark Wild, Crossrail chief executive, said: “The whole team at Whitechapel have done a fantastic job weaving between the existing operational transport services to create this incredible new Elizabeth line station which has been one of the most challenging Elizabeth line stations to construct. “I am delighted this station has now been handed over to London Underground and I am sure customers will be very impressed when they start using the new station entrance.” Andy Lord, London Underground managing director, said: “This really is a stunning station and incorporates a renovated Victorian entrance and a green roof to boost biodiversity. “I hope the local community will be as impressed with the station as I am. “With step-free access to the London Underground and London Overground platforms now available, there are real benefits for customers, particularly those heading to The Royal London Hospital directly across the road. “London Underground staff have already been getting acquainted with the facilities at the modern station, and as always are happy to help customers returning to the station or using it for the first time. “I know when the Elizabeth line opens next year it will provide another vital addition to the local community.”