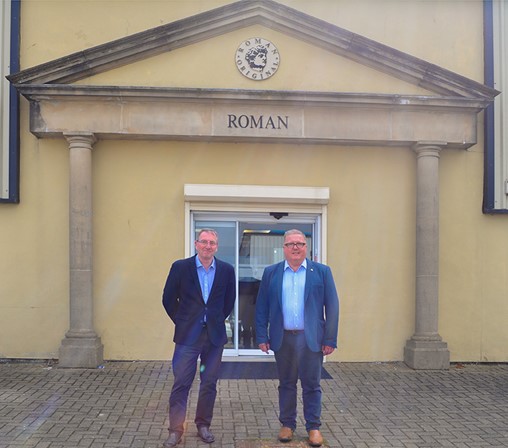 Shower designer and manufacturer, Roman, welcomed the MP of Sedgefield, Paul Howell, to its headquarters in Newton Aycliffe, County Durham. Howell has been supportive and interested in Roman since he was elected as the MP for Sedgefield in December 2019. Following 18 months of restrictions, the manufacturer was finally able to give him a tour of its manufacturing facilities, infrastructure and showrooms – whilst also highlighting successes in International trade and specification. Roman is one of the largest employers in the constituency and were keen to highlight inequalities in International trade tariffs and the evolving UKCA product marking system – Howell has been a great ally in supporting these issues. David Osborne, CEO of Roman, said: “It was great to finally welcome Paul to Roman and to show him our manufacturing facilities and showrooms in person.” Howell said: “It was fabulous to meet David and the team today and see the showrooms, infrastructure and manufacturing facilities at the Aycliffe Business Park HQ. This is a shining example of ‘Made in Britain’ at its finest and I look forward to visiting the team again soon.” The Simon Acres Group has introduced a cycle to work scheme for its staff that encourages and supports those that wish to cycle to work. Eight of the 20 staff have signed up for the scheme which will reduce their travel carbon footprint by 40%. The Cyclescheme is a government initiative, an employee benefit that saves 25-39% on the purchase of a bike and accessories. The scheme is easy to operate as the staff member taking up the benefit pays nothing upfront, with the payments taken tax efficiently from their salary by the employer, over 12 monthly instalments. They just need to order the new bike and Simon Acres Group pays the invoice. Facilities have also been provided at the Simon Acres Group office, such as bike racks and showers to make it easy for staff to make the switch and cycle into work. Director of Services Jordan Burns says, “We are delighted to offer this scheme, not only will we be reducing our collective carbon footprint, but our staff will be healthier, fitter and happier too.”