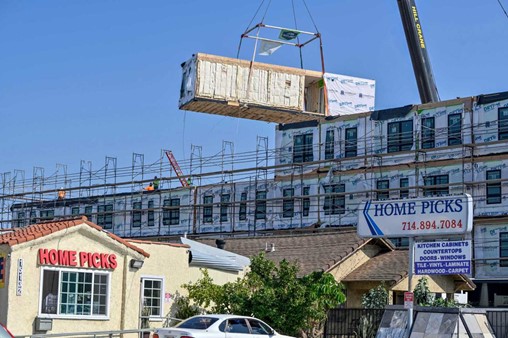 Can pre-fabricated dwellings, built in an out-of-state factory and put together on site with Lego-level precision, quicken the pace of creating housing for Orange County’s homeless population? Could it save some money, too? The developers of the 71-unit Casa Paloma supportive housing project in Midway City contend that the answer to both questions is “yes.” That’s why homeless services provider American Family Housing has undertaken an apparent first-of-its kind project to create pre-fab housing for people struggling to find shelter. Over the past two weeks, workers have put the units together, a process that’s relatively quick. Even when they add in other parts of the project — electrical work, roofing, stucco and siding, landscaping and community center — the total time to completion, estimated at nine months, will be about half would it would take to build a similar project from scratch. And when it opens, probably in June, they’ll have saved about $1 million. It’s no coincidence that the four-story Casa Paloma is across the street from Potter’s Lane, another innovative housing project that opened in 2017. At Potter’s Lane, designers repurposed cargo ship containers into studio apartments for homeless military veterans. The 16-unit development was believed to be the nation’s first permanent housing for homeless people built primarily with shipping containers. Both are projects of American Family Housing, which owns and operates 52 housing sites for homeless and low-income residents in Orange, Los Angeles and San Bernardino counties, while managing 10 more. Even though its mailing address is 15161 Van Buren St., the Casa Paloma property faces Jackson Street where Potter’s Lane is located. The rest of the neighborhood is a mix of older homes, a smaller apartment building, used car lots and light industrial businesses near Beach Boulevard and Bolsa Avenue. At a cost of $359,000 per unit, the price to build Casa Paloma is anticipated at $41 million. The land was purchased two years ago for $4 million, and going the pre-fab route shaved about $7,000 off the cost of each unit, or about $500,000 overall. The process also allows for a faster timeline from start to finish, along with better quality control, said Milo Peinemann, American Family Housing’s chief executive officer. The process has gone so well that the organization is considering other non-traditional building projects. “This definitely feels like the future to us,” Peinemann said. On Wednesday, Sept. 8, a crew from general contractor Cannon Constructors, and modular unit specialists Accuset Construction, continued work that began last week, using a giant crane to set the units in place. Peinemann led a small group of visitors to tour the site. The group included an American Family Housing board member, a representative of a social enterprise hub, and Dylan Wright, director of community resources for Orange County. Wright also was present for the June 29 groundbreaking, when only two modular units were on display. “It’s incredible,” Wright said to Peinemann about how quickly the development is taking shape. The site was once home to an architectural pottery business. While the dirt lot was being prepared for new housing, the modular units were built to specification at a factory in Boise, Idaho, by the firm Nashua Builders and later trucked on flat-beds to Midway City. The Potter’s Village shipping containers were refurbished at a business closer to home, in Los Angeles. Casa Paloma will consist of 59 one-bedroom and 12 two-bedroom subsidized apartments for chronically homeless people and low-income tenants in search of affordable housing. Residents will include individuals and families, and two of the units will be set aside for on-site property managers. Amenities will include laundry rooms, a playground, on-site parking, green space and a community room with a computer lab and a gym. Peinemann said Casa Paloma is also unique for its partnership with CalOptima, the county’s Medi-Cal health insurer. The partnership means people who move into the project after struggling with homelessness can get access to medical care and other support. Peinemann noted that homeless people often don’t get consistent preventative care, and their health is so fragile that they become “high volume” users of the healthcare system, typically via high-cost visits to hospital emergency rooms. During the tour, Peinemann shared how one homeless person recently referred to American Family Housing had been hospitalized more than 75 times over a recent 12-month period. “So you can just picture how vulnerable they are and they’re out there on the streets,” he said. American Family Housing also is part of a local collaboration called Housing for Health OC. It includes three other non-profit housing developers and homeless services providers — Friendship Shelter, Jamboree Housing Corp., and Mercy House — who are working with Orange County United Way to find housing for individuals who hold specialized Section 8 federal housing vouchers. Such vouchers are issued to homeless single adults who are younger than 62 and physically disabled. By the end of its first full year, in 2020, Housing for Health OC had found places for 129 of 252 homeless people who previously were among the highest users of crisis intervention services or emergency rooms. Others on the list were waiting for units to become available.