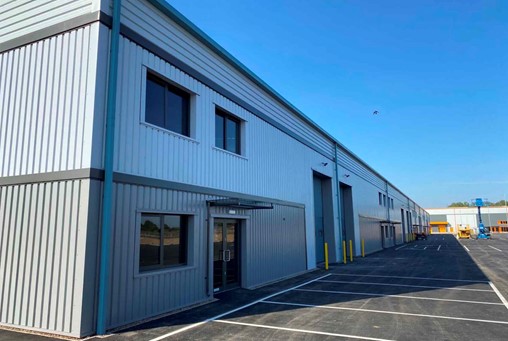 Nationwide businesses have started fitting out their new premises at a major multi-million-pound development near Netherfield. The first phase of construction has been completed at Teal Park off the Colwick Loop Road which is being jointly developed by Warwickshire-based AC Lloyd Commercial and Nottingham-based Henry Davidson Developments (HDD). The completed phase consists of 33,300 sq ft of trade units and a 28,860 sq ft industrial unit. This is part of a £30 million GDV mixed-use site which will also include a further six trade units and six large employment units totalling 111,000 sq ft, a care home, a new Local Centre with four retail shops, a children’s day nursery and a pub as well as an Aldi supermarket. Tool Station, Screwfix and Howdens are kitting out their new homes of 4,000 sq ft, 5,000 sq ft and 6,000 sq ft respectively ahead of their planned openings in the next few months. Mark Edwards, Managing Director at AC Lloyd Commercial, said: “This is the next exciting phase in the development of Teal Park and to be have delivered it on time and to budget, considering the impact of Covid-19 and labour and construction materials shortages, is sterling work from everyone involved. “We expect the total number of jobs to be created on the site to reach over 340 when all three phases are completed which will give a much-needed boost to the economy as we start to re-build following the pandemic.” Richard Croft, director at HDD, added: “Following the opening of the care home earlier this year, it will be great to see Tool Station, Screwfix and Howdens open their doors to their customers and really see the area come to life.”