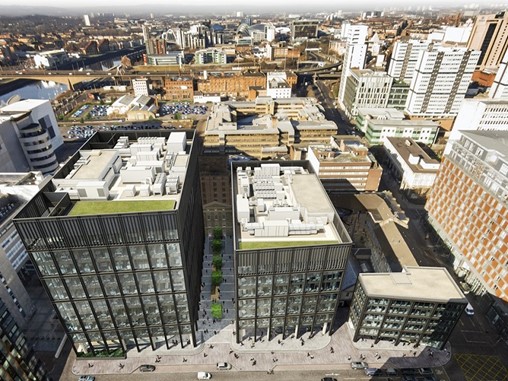 Willmott Dixon has won a scheme of works to extend and improve Leicester’s renowned Phoenix cinema and art centre. The project, which has been procured via SCAPE and is being funded by a number of major public and private organisations, comprises a new extension to the existing facility to house creative and education spaces, two new cinema screens, a larger café bar and roof terrace with accessible toilets and lifts. Parts of the current building – which was built in 2009 by the Willmott Dixon team – will also be refurbished to create new office and foyer spaces and extend the existing digital arts gallery. The £6.7 million project is being accelerated through SCAPE Construction, a direct award framework that drives collaboration, efficiency, time and cost savings. Nick Heath, director at Willmott Dixon, said: “We’re very excited about being awarded this project and extending Phoenix even further. The venue has proven to be an invaluable asset to the local community in Leicester – acting as a collaborative hub for filmmakers, artists, and creative businesses, which has facilitated job creation and economic output for the city’s creative industries. The build has also played a huge role in the area’s digital economy, attracting national funding and supporting initiatives to boost local tourism, so we’re incredibly proud to be a part of its continuing success. “Customer satisfaction is incredibly important to the Willmott Dixon team, and we always strive to deliver projects on budget, on time and to the highest possible standard. Being awarded another phase of works following completion of the initial build twelve years ago highlights how this standard has been embedded within the company for more than a decade. We can’t wait to collaborate with the Phoenix team again to bring even more creative benefits to Leicester city centre.” Throughout the project, Willmott Dixon will be working with Phoenix to ensure the venue remains operational and that the construction work causes minimal disruption to the occupants of the residential apartments housed within the existing building. “This project will present some challenges – such as its city centre location and the close proximity of residents, as well as the site remaining live throughout the programme of works – but our experienced operations teams will be working alongside our customer to find solutions that allow the project to run as seamlessly as possible. “Having said that, the project offers some exciting sustainability opportunities too. In line with our company commitments, the extension building will target a BREEAM Very Good rating and we will be installing electric car charging points for teams to use throughout construction works. We have also already conducted a low-carbon technology feasibility assessment, which will help the building incorporate the best fitting renewable energy sources. This has helped confirm plans for a green roof - making home to a biodiversity spot within the heart of the city. “It’s been an incredibly challenging year for the creative industries, so we want to do everything we can to ensure that the extension works don’t have a negative impact on footfall for the venue. Working alongside communities and engaging with local people is something Willmott Dixon really prides itself on, so we’ll be in constant communication with the Phoenix’s stakeholders to ensure the works don’t disrupt the facility’s ability to operate as usual.” Leicester City Council is helping to fund the project in the hopes that it will restimulate the local creative sector following a difficult year in lockdown. Des Curran, director for Marchini Curran Associates, said: “We are delighted to see these exciting proposals now moving forward to the construction stage. Thanks to the considerable efforts and excellent collaboration of all concerned.”