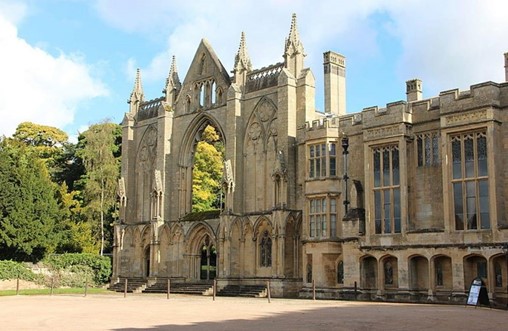 Three buildings and monuments from across Gedling borough feature on Historic England’s annual Heritage at Risk register due to fears over their future. The three sites of concern to Historic England include a church, monument and Abbey. On the register are listed or protected buildings and monuments whose future is uncertain due to reasons such as structural disrepair, ownership disputes, a lack of financial viability or inappropriate development. Entries are removed from the register when they receive major restoration or if a building has been repurposed, converted for a new use or given special legal protection from disturbance. The historic fort at Newstead Abbey was removed from this year’s register after major repair work was carried out. The following Gedling borough buildings and monuments feature on this year’s at-risk register… Church of the Good Shepherd, Thackery’s Lane, Woodthorpe This Grade II-listed building was opened in 1964. The architect was Gerard Goalen and the modern design won an award from the Royal Institute of British Architects in 1966 It features beautiful stained glass windows by Patrick Reyntiens. The at-risk register said: “The church is suffering severe concrete decay problems requiring urgent specialist attention to avoid loss of historic fabric. “An extensive programme of grant-assisted repairs, jointly funded by Historic England and National Lottery Heritage Fund, successfully renewed complex roofing and ensured concrete facing panels are safe and weather tight. “Further extensive repairs, possibly renewal, needed to mullions and glazing. Specialist advice is required.” Round Hill, Lambley Situated on high ground near Lambley is Round Hill. Round Hill was previously believed to be a fort, however, more recent excavation has revealed a mill bearing which would indicate it was a mound for an early windmill and possibly medieval in origin. History experts believe it was probably associated with the nearby manor house. The mound is a listed monument. The site is now featured on the at-risk register, with Historic England reporting it has ‘significant localised problems’ and ‘in decline’. Newstead Abbey, Newstead The priory was built in 1165 and eventually became a post-Dissolution country house. It is now a visitor attraction and museum, set in formal gardens and parkland and also former home of the poet Lord Byron. The at-risk register reports the building as being in a ‘poor’ condition. It says: “By 2018, stone fragments were falling from the adjoining priory church ruin and the area was cordoned off. Historic England awarded a two-stage grant in 2018 and repairs were completed in 2020. “Roof coverings of the main house are at the end of their effective lives. Leaks are addressed as they occur, but re-slating is now required. Development work is required as an initial step in planning for repairs.” Subscribe to Gedling Eye’s weekly newsletter