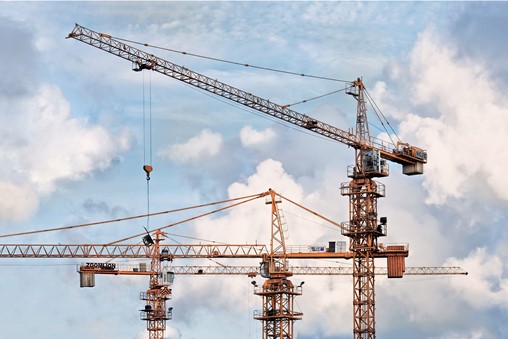 UK construction growth remained much softer in October than the 24-year high seen in June, as businesses report widespread supply constraints and rapidly increasing purchase prices The seasonally adjusted IHS Markit/CIPS UK Construction PMI® Total Activity Index registered 54.6 in October, up from 52.6 in September, to signal a robust and accelerated rise in output volumes. This index has now posted above the crucial 50.0 no-change value in each of the past nine months and hit a peak of 66.3 in June. Figure breakdown Housebuilding (index at 55.4) replaced commercial work (55.2) as the best-performing category of construction work in October. The latest increase in residential work was the strongest for three months. Commercial construction also expanded at a quicker pace than in September, with survey respondents citing a sustained boost from looser pandemic restrictions. Meanwhile, civil engineering activity (51.4) increased only marginally in October. New order growth was unchanged from September’s 8-month low and much weaker than seen on average during the summer. Construction companies mostly commented on strong customer demand, but some suggested that supply shortages and escalating costs had hindered contract negotiations. Resilient pipelines of new work were highlighted by a steep increase in purchasing activity across the construction sector in October. The latest expansion was the fastest for three months and often reflected pre-purchasing ahead of new project starts. Employment numbers also increased at a sharp and accelerated pace in October. Delays 54% of the survey panel reported longer delivery times among suppliers in October, while only 2% saw an improvement. Delays were overwhelmingly linked to haulage driver shortages and international shipping congestion. However, the number of construction firms reporting longer wait times for supplier deliveries was down from 63% in September and a peak of 77% in June. Mirroring the trend for supplier delays, latest data signalled another steep rise in input costs, but the rate of inflation slipped to a six-month low. Around 73% of the survey panel reported an increase in purchase prices in October, which was attributed to rising energy and commodity prices as well as raw material shortages and a lack of transport availability. Finally, the near-term outlook for construction growth remained positive in October. 52% forecast an increase in output during the year ahead, while only 8% expect a decline. The degree of optimism improved slightly since September, despite some firms citing concerns about the impact of supply shortages and sharply rising costs. ‘Construction output growth in a league of its own’ Mark Robinson, group chief executive at SCAPE, said: “Despite the on-going volatility in the sector’s supply chain, construction output growth has remained in a league of its own and is a testament to the industry’s resilience. “Whilst still grappling with the speed and cost at which projects are being delivered, a renewed focus has been placed on the levelling up agenda following the Chancellor’s sizeable cash injection to invest in the long-term future of regional communities. “The role of an engaged public sector has never been more important to deliver on the plans for more connected and low-carbon local communities. “To do this, greater emphasis will need to be placed on best-in-class procurement to ensure local government can maximise the impact of this latest and substantial capital investment.” Jan Crosby, head of infrastructure, building and construction at KPMG UK, commented: “The construction sector has had every challenge thrown at it this year and yet in the face of this ongoing volatility there is still huge demand for projects, which firms are working incredibly hard to deliver. This can be seen in the welcome spike in activity this month. “As well as the much-reported supply chain delays and lack of lorry drivers, the sector has had to deal with labour shortages, including appointing subcontractors. “But firms are resilient, and I’d expect to see continued growth in demand for energy efficient buildings to drive energy retrofitting and services, as well as new build growth where existing buildings are no longer seen as green. “The sector is confident it can meet demand. As we look ahead to 2022, firms will be hoping the right support is put in place to fix these challenges to help drive further growth.”