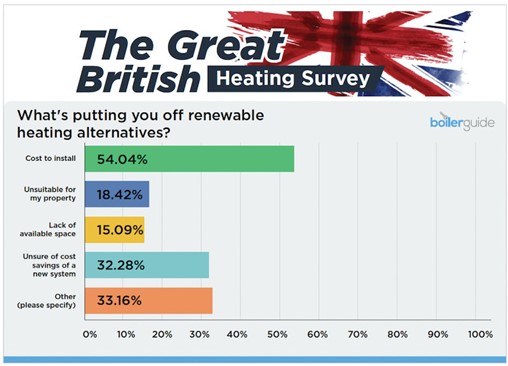 A new survey from Boiler Guide is revealing the public’s attitudes towards home heating and going green following the release of the government’s Heat and Buildings Strategy. The Great British Home Heating Survey asked 18,000 customers their opinions on some of the Strategy’s plans and found that the majority (51%) will not be applying for the £5000 heat pump grant offered through the Strategy’s £450 million Boiler Upgrade Scheme. Boiler Guide also asked if customers supported an outright ban on gas boilers, which the government plans to do by 2035. Over 43% do not back a ban, while 25% of those surveyed are in favour. 31.97% were unsure or had not thought about it. When asked, ‘What’s putting you off renewable heating systems’? 54.37% of people pointed to ‘cost to install’, followed by 18% judging renewable systems ‘unsuitable for my property.’ A lack of available space is also cited, garnering 15% of responses. 77% of those surveyed said that the government should provide more financial help to decarbonise heating. Alternatives to gas boilers While a majority of those surveyed believe heat pumps are a good alternative to gas boilers (33% compared to 26% who don’t), 51% have not yet considered replacing their existing system with a renewable alternative. 36% have, while 13% haven’t thought about it at all. Heat pumps do come out on top when it comes to the most considered renewable heating systems, with 46.2% stating that a heat pump would be first choice. Solar panels (31%) and electric boilers (18%) also feature in the poll of 18,000 homeowners. How much? Customers were also asked how much they would be willing to pay to decarbonise their home’s heating. 37% said between £1 – £2,999, while 34% stated that they would not spend anything. 19% responded with £3000 – £5999, 7% would stretch to £6,000-£9,999, with 3% willing to pay over £10,000 to go green at home. No-Go for Net Zero? As world leaders met in Glasgow for the COP26 agreement, Boiler Guide also asked customers if they believed the UK can achieve net-zero targets. Just 32% of those surveyed think that the ‘UK can reach carbon net zero by 2050’ compared to 68% who think this won’t happen. David Holmes, founder of Boiler Guide, says: “The data we have collected points to general public support for decarbonising heating, but it is clear that the vast majority of homeowners think the government should be offering more financial incentives and support. “It is unsurprising to see that the majority of customers are happy to pay for a renewable system if the price is comparable with a new gas boiler. The reality, however, is that the costs of heat pumps and solar installations will usually exceed £10,000 and it seems there is little public appetite or ability to invest such large sums of money to replace a system they are happy with.” Categories