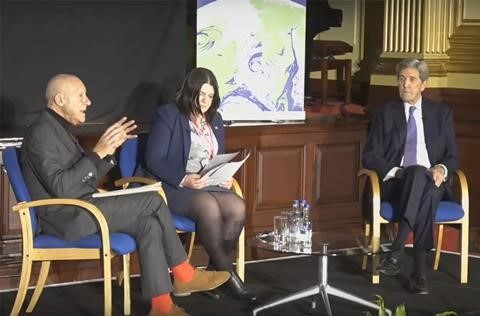 Architect draws parallels with space race spawning the environmental movement The climate crisis is a design issue that we have the brains to solve, Norman Foster told an event at COP26. Speaking at an event in Glasgow with former US secretary of state John Kerry, the architect draw parallels with the space race – and revealed how he first became interested in environmental concerns in the 1960s. The pair – who are neighbours in Martha’s Vineyard, the New England holiday island favoured by the rich and famous – were the keynote guests at a breakfast organised by C40, a global network of mayors. Foster began by asking Kerry why it had taken politicians 30 years since they were first warned about climate change to take note. Kerry spoke of humans’ capacity for denial and “ability to engage in the absurd”, exemplified by the fact that the US had subsidised the fossil fuel industry to the tune of $2.5tr in the last six years while also trying to deal with climate change. He warned the next 10 years would be “the crisis decade” before turning the question on Foster, asking why architects and urban planners had allowed our cities to become clogged with traffic. “We ignored the lessons of history,” said Foster. The post-war rise of the car had encouraged sprawl – and yet the most desirable cities were all compact, dense and pedestrian-friendly, he said, urging the mayors in the audience to recover their civic pride and recounting Jane Jacobs’ famous fight to stop Robert Moses building an expressway through Greenwich Village in the 1960s. “I think we are rediscovering the benefits of traditional cities and the importance of the infrastructure,” he said. “I’m an architect but I’m probably more passionate as an urbanist about the DNA of a city, the urban glue that binds all the buildings together – the boulevards, the plazas, the public spaces, the bridges, the connections – that’s what determines the quality of urban life and that’s where the investment should go.” Kerry asked what architects and city planners needed to do to make cities more sustainable and Foster drew further lessons from history. He pointed to the Abercrombie Plan for London – commissioned at the height of the Second World War – whose legacy was that today most Londoners lived in 15-minute neighbourhoods, a policy now championed by the mayor of Paris. He talked about President Kennedy’s decision – during the Cold War – to try and put a man on the moon which had led to the seminal “Earthrise” photograph taken by an astronaut which, he said, spawned the green movement. “The 60s were hugely influential on me,” he said. “That was when I became a green architect. I was inspired by Rachel Carson [and her book on pesticides] The Silent Spring, Bucky [the designer Buckminster Fuller] drawing attention to the fragility of the planet. This couldn’t have happened without the space race, without seeing [that image]. “So the power of using design. Global warming is a design issue. We have the ability, we have the brains, we have the technology.” Foster talked later about the failure of the current environmental certification for buildings to consider embedded carbon.