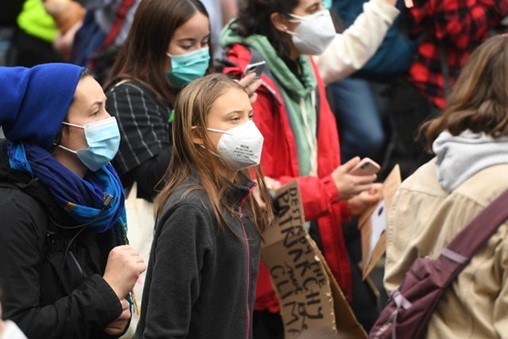 The former president touched down in Scotland on Sunday night and will on Monday make a speech as well as hold meetings with key leaders. He is understood to be staying in Edinburgh rather than Glasgow. Ahead of the trip, Mr Obama tweeted: “Five years ago, the Paris Agreement went into effect. Paris provided an important framework in the fight against climate change, but it wasn’t enough. “That’s why I’ll be speaking in Glasgow on Monday about the road ahead and what young people in particular can do to help.” According to his spokewsoman Hannah Hankins Mr Obama will “lay out the important progress made in the five years since the Paris agreement took effect, highlight the leadership of young people around the globe, and urge more robust action going forward by all of us - governments, the private sector, philanthropy, and civil society”, the Scotsman reports. While the former US President holds meetings, indigenous activists from the It Takes Roots campaign will be highlighting his legacy of military expansion into the Pacific, drone warfare and the use of military interventions on water protectors fighting against the Dakota Action Pipeline. The action during COP26 claims US military is the single largest consumer of fossil fuels in the world but is, so far, not obliged to publish emissions data for national security reasons. In 2015, the Paris Climate accord was adopted, which included a measure in which countries could voluntarily report on military emissions. But so far there has been no legal requirement for nations to do so, and the issue of military emissions remains absent from the COP26 agenda.