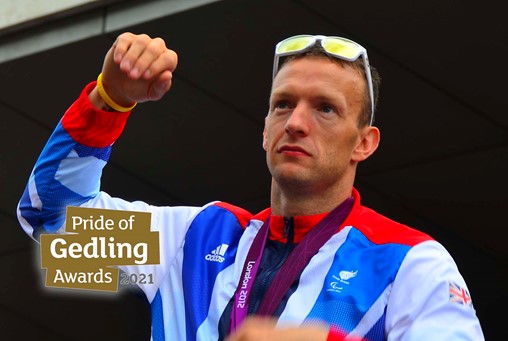 Gold-winning Paralympian Richard Whitehead is to receive the top honour at this year’s Pride of Gedling Awards. The Burton Joyce resident, who already has an MBE, will receive the Lifetime Achievement Award during Wednesday night’s (November 10) ceremony. Richard has won Paralympic gold and held world records for marathons and long distance running events. His success on and off the track has propelled him to stardom and he has become an ambassador for people across the world with disabilities and his hard work will be recognised at the event. The annual Pride of Gedling awards celebrate the very best of Gedling borough’s residents and businesses and the incredible achievements from the community over the last year. The event will be held in the council chamber at the civic centre after last year’s awards were held online due to covid restrictions. The council received over 180 nominations across the six judging categories. Each award has been shortlisted to three nominations and the winners and runners up will be announced at the event. As well as the six awards, an overall Pride of Gedling Award will be given to a nominee who stood out as an incredible candidate. They will receive the prestigious award and their name will be etched in gold leaf on the winners board in the council chamber. The event will be held on Wednesday, November 10 from 6.30pm at the council’s civic centre. Smooth FM’s Gareth Evans will be hosting the event and will be announcing the nominees for the awards. Each award is being sponsored by a local business and the overall sponsor of the awards is Keepmoat Homes. Gedling Eye has also again sponsored one of this year’s awards. The awards will be streamed live on the council’s youtube page. Leader of Gedling Borough Council, Councillor John Clarke said “After another difficult year for our residents and businesses, we are very pleased to be hosting the Pride of Gedling Awards that recognises the absolute best of our borough. “The nominations this year have been of the highest standard and it was incredibly difficult to pick winners. “It will be a great honour to host this event and I would like to thank everyone who sent in a nomination and wish the nominees the best of luck. Clarke added:”I would like to congratulate Richard Whitehead MBE on his lifetime achievement award, I won’t say too much now and spoil my speech ahead of the event but Richard has achieved incredible success and we are very proud of everything he has done to raise the profile of people with disabilities and to inspire millions of people across the world.”