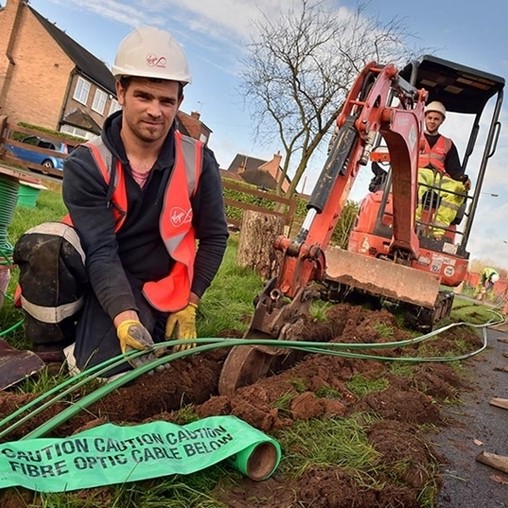 posted by Virgin Media More than 90 per cent of Virgin Media O2’s network now gigabit ready, with 14.3 million homes across the UK able to access average download speeds of 1,130Mbps - 22 times faster than the national average Virgin Media O2 is close to completing its national gigabit rollout programme with more than 90 per cent of homes across its network now able to access its hyperfast gigabit broadband. As part of today’s gigabit switch-on, Virgin Media O2 has upgraded its network with 1.6 million extra homes gaining access to next-generation connectivity in towns and cities including Lincoln, Bath, Lancaster, Fife, Huddersfield, Ipswich, Slough and Salisbury among many others. Virgin Media’s next-generation Gig1 broadband service, with average download speeds of 1,130Mbps, is the fastest available from a major broadband provider in the UK – 22 times faster than the national average. As well as preparing homes for the technologies and applications of tomorrow, gigabit speeds enable consumers to do more online – from working, streaming, socialising and gaming – all at the same time and on multiple devices. Virgin Media is, by a very significant margin, the UK’s largest gigabit provider in the UK and by the end of this year the company will deliver gigabit broadband speeds across its entire network of 15.5 million homes. Lutz Schüler, Chief Executive Officer at Virgin Media O2, said: “We’re making great strides ahead in upgrading the UK and are within touching distance of bringing the benefits of future-proof gigabit broadband to everyone on our network. “With our gigabit rollout progressing at an unmatched pace, we’re building the next-generation broadband network that’s ready for the technology of tomorrow.” Virgin Media O2 upgrading the UK to gigabit speeds As part of its mission to upgrade the UK, the company has committed to invest at least £10bn over the next 5 years in the UK and, building on the success of its existing fibre network expansion activity, is actively exploring options to go further and faster by deploying fibre to millions of additional homes across the country. This investment includes an accelerated monthly rollout of gigabit speeds to multiple locations across the UK between now and the end of the year. Recently, the Department for Culture, Media and Sport – using ThinkBroadband data – revealed that more than 50% of UK homes now have access to gigabit broadband and praised Virgin Media O2 for its major contribution. Virgin Media O2 has also recently announced its intention to upgrade its fixed network to full fibre to the premises (FTTP) with completion in 2028. This technology is capable of delivering symmetrical 10Gbps download and upload speeds meaning Virgin Media O2 will build on its existing leadership position today and be well equipped for the decades ahead as the demand for speed and capacity continues to rise. Gig1 – faster speeds, new router and competitive pricing Customers taking Gig1 will benefit from Virgin Media’s gigabit capable router – the Hub 4. The router features Intelligent WiFi firmware to provide speedy and reliable connectivity throughout customers’ homes. The Hub 4 boasts more antennae than its predecessor, the Hub 3, meaning it can manage multiple devices at the same time around the home which can all share the hyperfast speeds. Gig1 customers can also take their connectivity to the next level with Intelligent WiFi pods which are available at no extra cost. The pods can help tackle WiFi blackspots around the home, providing faster and more reliable speeds in hard-to-reach spots. Gig1 broadband is available to new and existing customers and can be packaged with or without telephone, TV and mobile services. Prices start from just £62 per month on an 18 month contract with a guaranteed price freeze for at least 24 months. Customers can find out more and buy Gig1 at https://www.virginmedia.com/broadband/gigabit What does Virgin Media's network upgrade mean for the UK government's plans for Gigabit Britain? Find out from the experts at next year's Connected Britain Also in the news: Since you're here... ...the Telecoms industry is characterised by constant change and evolution. That's why it's crucial for telecoms professionals to keep up-to-date with what is happening. Join 35,000+ of your peers and sign up to our free newsletter service today, to be in the know about what is going on. PLUS, as a member you can submit your own press releases!