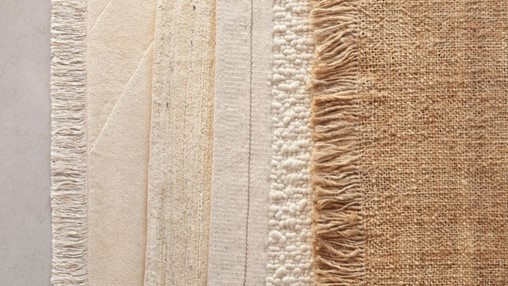 Australian rug brand Armadillo has teamed up with British interior design studio House of Grey to create a collection of minimal rugs that references the tones and textures found in nature. The Ellipse Collection is a collaboration between Armadillo and the London-based practice led by interior designer Louisa Grey, which aims to create products with positive ecological and health properties. The collection, which is shortlisted in the homeware design category of Dezeen Awards 2021, comprises five rug designs that are handmade in India using only sustainably-sourced natural fibres. "We were driven to create pieces of integrity that simply could not be found elsewhere," said the studio. "Throughout the design process, we sought to evoke a sense of tranquillity while pushing the envelope in terms of innovation and technique." Ellipse Collection rugs are made using natural fibres such as jute, wool and linen that will last a long time and eventually biodegrade at the end of their lifespan, helping to minimise their impact on the planet. The materials are either left in their original state or dyed, before being hand-knotted on traditional looms in a production process conducted according to Fair Trade practices. Included in the collection are designs that celebrate the natural properties of the raw materials, along with rugs that showcase experimental weaves and finishes. "Each rug is pared back to its very essence, tailored and sculpted to encourage visual and tactile exploration as well as individual introspection," added Armadillo. The Terra design is an earthy everyday rug made from jute that lends it a rustic quality. The simple textured surface and hues are influenced by paths found in sand, grass or soil. Etoile is a Tibetan-knotted rug that features a gradation of textures and asymmetrically curved edges on one end, which frame the low-cut pile. The Palus rug features marled wool that is felted and then twisted to create a surface with varying heights and a soft irregular texture, while Perilune uses wool that is hand-spun with silk to produce a subtle sheen. Finally, the Umbra design is hand-knotted using soft Afghan wool that is left undyed to celebrate the natural variations in its tone and texture. Lines inspired by early cave paintings are carved into the pile. Armadillo was founded in 2009 by Jodie Fried and Sally Pottharst. In 2020, the brand opened a showroom in Sydney, which Studio Goss designed using a palette of concrete, plaster and tiles to create a minimal backdrop for the rugs on display. House of Grey was behind the design of a home in London's Highgate neighbourhood that features a palette of natural colours and soft textures. The photography is by Emma Lee. Swiss architecture office Herzog & de Meuron has released a plans for an earth- and glass-clad building overlooking the Mississippi River that will house the Memphis Brooks Museum of Art. The project will see the existing art museum relocated to this new 112,000-square-foot (10,405-square-metre) building that will be located in downtown Memphis and perched on a bluff above the river. The updated Memphis Brooks Museum of Art will comprise a rectilinear glass pavilion supported by a sloping earthen base that will be reconstituted from the bluff. This exterior cladding will intend to recall the hues of the exposed clay landscape along the Mississippi River. With a superstructure made from cross-laminated timber, the pavilion is designed to be sustainable according to its architects. Visitors will access the museum at the main entrance formed from a pair of double-height wooden columns, a metallic canopy and a brick-paved entry court. The entrance area will include a cafe and a shop. Featuring expansive views of the river, the structure will also frame a wooden-clad courtyard designed as an outdoor room for public gatherings. A series of interior galleries will encircle this courtyard, all positioned on the same main level for ease of access. This level will also house education classrooms and spaces for interactive family activities, while parking and other public facilities will be located below. A 175-seat theatre encased in a glass box will be elevated above the entrance and cantilever outwards over the courtyard. Scheduled to open in 2026 after breaking ground in 2023, the new Memphis Brooks Museum of Art from part of the current Memphis Riverfront Concept created by architecture offices Studio Gang and SCAPE to redevelop the city's waterfront. Herzog & de Meuron was founded in 1978 by Jacques Herzog and Pierre de Meuron. Other recent cultural projects by the firm include a brick extension for Germany's MKM Museum Küppersmühle and a wedge-shaped art institute in Seoul, South Korea. The renderings are courtesy of Memphis Brooks Museum of Art.