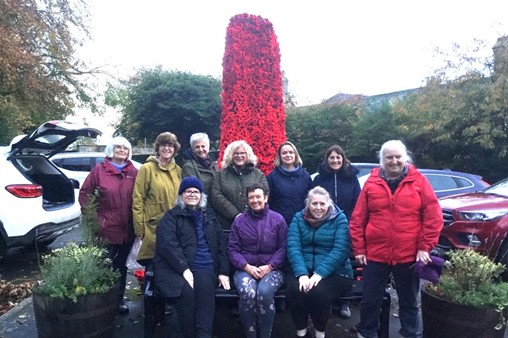 The tributes to those who gave their lives in battle have sprung up in Longhoughton, Powburn, Wooler, Lowick and Spittal. In Longhougton, over 100 local women have been furiously knitting and crocheting 3,000 plus poppies since April. Its poppy cascade is now installed on School Green. Longhoughton Community and Sports Centre supplied the wool and other materials as part of a ‘coming out of Covid’ community craft project. Ellie Phillips, chair of trustees who led the project, said “ This important project has offered a positive focus in the village as we all took stock from our Covid experience. "It’s brought the community together and with many military families living in the village it’s particularly important to us all to honour the fallen in all conflicts.” In Powburn, volunteers from across the North East have been knitting and crocheting poppies to create a display in the Powburn Community Garden. The hundreds of individual poppies were subsequently assembled into a creative vista that was put on display last week. In Wooler, more than 2,000 poppies have been knitted and tied individual to the floral planter in the Market Place. Susannah Scott, who helped to co-ordinate it, said: “The display has involved lots of local ladies who knitted poppies. It was all put together by me and my mum, with over 2,000 poppies all tied on individually.” Spittal Improvement Trust’s Gardening Group, and friends, turned their talents over several weeks to knitting poppies for two cascading displays, which are on the war memorial and St Paul’s Church. In total, about 1,800 poppies were knitted – 350 of those are at the war memorial and the rest at the church. Tim Cryar, chairman of the Royal British Legion North Northumberland branch and Poppy Appeal organiser for the very northern part of the county, said: “The response to the Poppy Appeal in north Northumberland has been very good and we’re grateful for all the support." Meanwhile, a special memorial service to mark the 100th anniversary of the founding of the Royal British Legion will be held on Armistice Day, Thursday November 11, from 10.55am at St Paul’s Church, Branxton. Visit our website to see further details of Remembrance services. https://www.northumberlandgazette.co.uk/whats-on/things-to-do/remembrance-commemorations-planned-across-north-northumberland-3451509 Support your Gazette and become a subscriber today. With a digital subscription you get access to the ad-lite version of our website, meaning you see fewer ads, enjoy faster load times and get all of the headlines you need with fewer distractions. The Northumberland Gazette has been serving the county since 1854, and your support means we can continue telling your stories for generations to come.