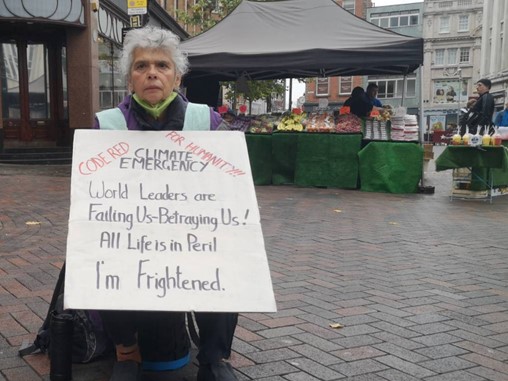 A Gedling activist is one of three Extinction Rebellion (XR) members holding sit-down protest today (November 10) at locations across Nottingham city centre. Jeannie Thompson, 71 carried out her protest near the Boots Library on Shakespeare Street. The grandparent from Gedling said: “I am sitting in the street because I want my granddaughter and you to have a happy secure life. “I am worried that you won’t because of climate change. It will bring floods, heatwaves, droughts, famine, and terrible storms. Millions of humans and animals will die.” The three protests began at 11am, coincide with other actions all over the UK today, some of which will be disrupting traffic. All protesters in Nottingham today chose to use pedestrian areas to bring their messages to the public’s attention. Karunavaca Lake, 71, a retired psychotherapist, sat at the junction of Clumber Street and Long Row, She said: “I’m sitting here because I’m scared and desperate and furious. COP26 is a disaster, I see world leaders failing us, betraying us on a huge scale. I can’t trust or rely on those leaders, or a system that is all about profit and exploitation. But I do still believe in people – people all over the world – in their millions, having the courage and confidence to come out and act together. In support of life, of all our futures we have to act now.” Sitting near the Portland Building at the University of Nottingham is Etienne Stott. The 42-year-old sports coach and London 2012 Olympic Champion said: “I feel angry that the future which young people are facing is bleak. They are being cruelly disenfranchised as the can is kicked down the road into their adulthood, where they will be left dealing with the consequences. “2050 targets sound good, but they are too late given the remaining carbon budget to keep to the 1.5 degree limit. I hope they can find a way to make their voices heard and their feelings known.” Despite the UK hosting the COP26 negotiations, the government’s own Climate Change Committee (CCC) has said the government is failing on its targets. The committee’s report has called the current government’s actions so far as “disappointing” and that the UK will miss climate goals by ‘huge margin’ without new policies. A statement from XR Nottingham said “We plan to continue to use peaceful civil disobedience methods to highlight the failures of politicians at local and national level to create appropriate policies to tackle the climate and ecological emergency. Without strong leadership and solid promises of action from COP26, emissions are projected to keep rising which put the world on a dangerous path to disaster on a terrifying scale.”