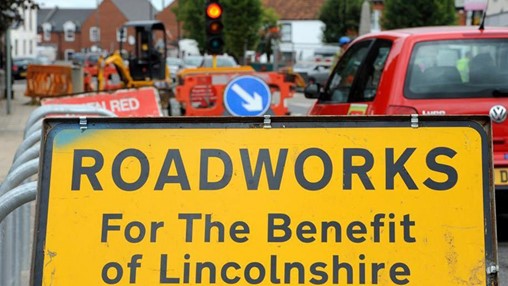 Lincolnshire has been named as of one the UK’s roadworks capitals with over 66,000 projects in two years, according to a recent study. Lincolnshire was ranked sixth in the areas with the most roadworks with 66,761, only behind Leicestershire, Kent, Birmingham, Sheffield, and Herefordshire, which was at the top of the list with 105,614 roadworks. Of the 66,761 listed for Lincolnshire, 30,537 were carried out by the county council. The study by Moneybarn requested Freedom of Information Act data on the number of roadworks from local councils. It ranked the results based on the 151 councils that responded with useable data. Photo: Moneybarn The study states: “Not all areas of the country have the same level of roadworks, and to determine where in the country is best for uninterrupted drives we have launched an in-depth data-driven study into the areas with the most frequent and recent incidents of road and street works.” Lincolnshire County Council was able to invest around £25,000 per mile in its road network, while London councils were able to afford an average of £62,000 per mile. The council said that over this financial year and last it has spent a combined £102 million maintaining Lincolnshire’s 5,500 miles of road. Photo: Steve Smailes for The Lincolnite Councillor Richard Davies, executive member for highways at Lincolnshire County Council, said: “Although the details of this study aren’t as clear or accurate as they could be, the results do demonstrate that we’re doing everything we can to keep our county’s vast road network in good condition. “In fact, over this financial year and last, we’re spending a combined £102 million maintaining Lincolnshire’s 5,500 miles of road. “This is in addition to all of the major road schemes we’ve recently completed or currently have underway, like the Lincoln Eastern Bypass, Grantham Southern Relief Road, building the new Dunholme/Welton Roundabout and improving Holdingham Roundabout near Sleaford. “Yes, roadworks can be disruptive, but they’re also a strong indication that local authorities and utility companies are proactively working to develop and maintain the essential infrastructure services we all rely on. “However, we will continue working hard to streamline roadworks when scheduling them so that disruption is kept to an absolute minimum.” “It’s also important to remember that, without sufficient funding, people will continue to see our roads get worse – and cuts from central government don’t help. Earlier this year, Lincolnshire had its road maintenance grant from Westminster slashed by £12 million, or 25%. This has meant fewer potholes filled and more exasperated motorists.” Moneybarn said that all the data was collected by sending Freedom of Information requests to councils across the UK, saying: “Under the Freedom of Information Act, I would like to request the number of street works and road works carried out by the council for both the 2019/20 and 2020/21 financial years. If possible, I would also like to know the longest-running works that took place in both of these periods.” Out of the 395 councils that the requests was sent to, 244 did not respond, declined the request or sent unusable data. This left 151 councils that were ranked by the total number of roadworks over the past two years. The difference between the number of roadworks in both 2019/20 and 2020/21 was then calculated. Spotted an error? Please notify us by selecting that text and pressing Ctrl+Enter.