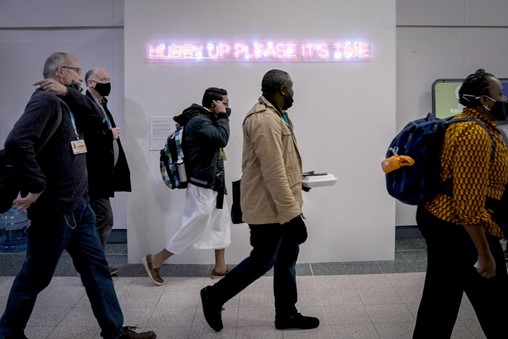 T he Cop26 climate talks are entering their final scheduled day with the summit’s president warning there is still “a monumental challenge ahead”. The talks are scheduled to finish at 6pm on Friday, but could overrun as negotiators come under pressure to resolve issues around finance for poor countries, calls for accelerating the phase-out of fossil fuel subsidies and coal, and the efforts of countries to cut emissions in the 2020s. A new version of the overarching deal that could be agreed at the summit in Glasgow is expected overnight into Friday. The first draft of the “cover decision” urges countries to “revisit and strengthen” targets for cutting emissions by 2030 in their national plans, to align them by the end of 2022 with the Paris goal of keeping temperature rises to “well below 2C” or to 1.5C. The document published on Wednesday includes a call for developed countries to at least double their collective provision of finance to help developing countries adapt to climate change, as part of scaling up funding for poorer nations to tackle the crisis and address loss and damage. Some of the most vulnerable nations have raised concerns about the lack of detail. It is thought the commitment to phase out fossil fuels, the first time this has appeared in such a text, is unlikely to make it into the final document. As the talks entered the final stretch, Cop26 president Alok Sharma warned: “We still have a monumental challenge ahead of us, but collectively we have no choice but to rise to that challenge and strain every sinew to achieve a timely outcome that we can all be proud of. “Because ultimately, this outcome, whatever it is, will belong to all of us.”