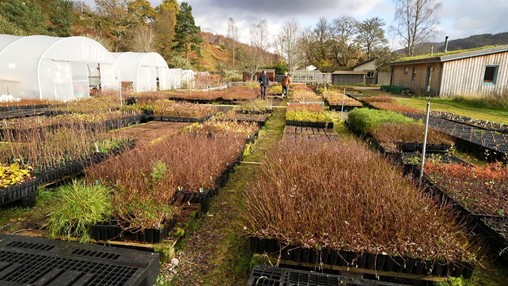 An "open air laboratory" has underlined the value of Scotland's wilderness in holding back climate change. One of the most comprehensive-ever assessments of the carbon held on a Scottish estate has shown that rewilding the landscape to its natural state could help it store more carbon and increase biodiversity. The Bunloit Estate covers 1,200 acres in the hills above Loch Ness. By using drone-mounted lasers to scan trees and surveying the extent and depth of peat, scientists were able to measure the amount of stored carbon. They found the estate held the equivalent of 1.234 million tonnes of carbon. That's the roughly 2% of Scotland's annual carbon footprint. More from Climate The analysis has already led to radical action, with some trees being cut down for the good of the planet. Figures showed peatland covered in commercial spruce plantations was so dry and damaged that it was releasing more greenhouse gases than the trees were absorbing. By felling the spruce and allowing the peat to return to its natural boggy state there would be a net benefit of 60,000 tonnes of carbon stored over the next 100 years. Nicola Williamson, a ranger on the estate, told Sky News: "It's a bit counter-intuitive. "But we have to take down plantations planted in the wrong places like our peatland bogs and restore that as a habitat in itself. "And we have to manage our woodlands better so they are meeting biodiversity targets." Camera traps on the estate show there are already pine martens, red squirrel, and wild boar. But restoring more mixed woodland would encourage a broad range of species to thrive. Bunloit is at the eastern end of what could be a 500,000 acre forest stretching all the way to the Atlantic. The project is being driven by the charity Trees for Life, which says a quarter of the estates in the Affric Highlands area have signed up. Steve Micklewright, the charity's chief executive, said 60,000 native trees are being grown in a specialist nursery each year and planted on the hills. "The highlands are beautiful but in many ways they are an ecological dessert," he said. "Much of what should be here isn't here anymore. But there are remnants, there are patches of the original Caledonian forest and beautiful peatlands that can be restored and nurtured. "And they can be the source of a wider landscape change." But not everyone is convinced. Angus MacFadyen has 1,300 ewes, several dozen cows and, he says, plenty of wildlife on his farm. He doesn't see the sense in covering good land with trees. "These hills that I'm farming on couldn't take trees," he said. "I'm talking about things like the depth of peat and the steepness of the banks. "We couldn't plant trees on there so better to have a good moorland management scheme and a proper grazing regime to help store the carbon." Those pushing for big-scale rewilding stress the opportunities for green jobs in forestry, timber construction and conservation. Success will hinge on control of deer, which destroy young trees, and either need to be fenced out of growing woodland or controlled by shooting or, perhaps in future, an introduced predator such as lynx. That would concern farmers, who fear the big cats would take lambs. But Trees for Life says decisions over introducing a predator are for the next generation. The urgency now is replanting Scotland's forest to help slow climate change.