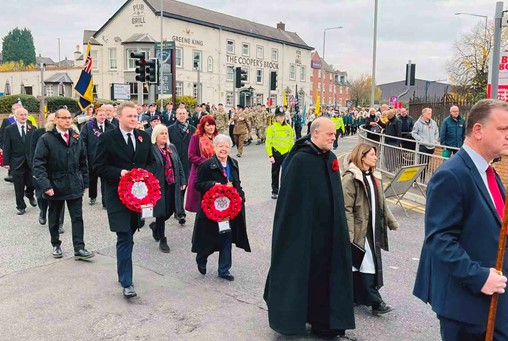 Gedling borough fell silent to honour the country’s war dead at a number of annual Remembrance Sunday commemorations this morning. Civic dignitaries, servicemen and women, service and ex-service organisations, faith leaders and uniformed organisations came to pay their respects along with members of the public during services in Gedling, Arnold, Mapperley and Daybrook. Deputy leader of Gedling Borough Council Michael Payne attended the memorial service, parade and wreath-laying ceremony at Arnot Hill Park in Arnold. He was joined by Councillors Henry Wheeler, Michelle Welsh, Sandra Barnes and Kathryn Fox. He said: “It was an outstanding turnout by Arnold’s community this morning on Remembrance Sunday for our local Remembrance Parade and Service at St Paul’s Church and Arnot Hill Park War Memorial. “Thank you to our community for such an overwhelming turnout.Our thanks to those who have served and continue to serve our Queen and country.” Gedling MP Tom Randall attended the Daybrook church service and the wreath-laying ceremony in Arnold. He said: “It was lovely to see so many people out today. Thank you to everyone for attending.” Mayor of Gedling Cllr Meredith Lawrence attended the service at All Hallows Church in Gedling and wreath-laying service at the war memorial in Gedling village. A service of Remembrance will take place in Mapperley next Sunday (21).