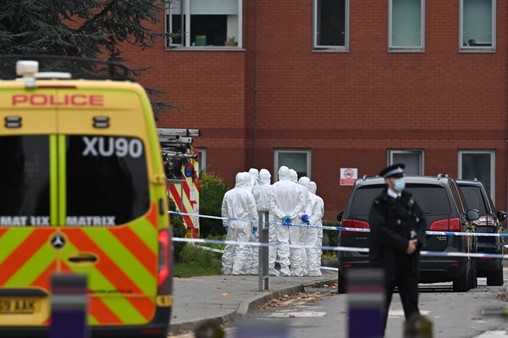 The UK’s terrorism threat level has been increased to severe meaning an attack is “highly likely”, the Home Secretary has confirmed. It comes after there was an explosion outside the entrance of Liverpool Women’s Hospital on Remembrance Sunday. A taxi was engulfed in flames after the explosion, which left the passenger dead and the driver injured. Police have declared it as a terror incident. Why the terror threat level has been increased Priti Patel said the terror threat level had been raised because there had been two attacks in the space of a month. Speaking to broadcasters, she said: “The Joint Terrorism Analysis Centre, Jtac, are now increasing the United Kingdom’s threat level from substantial to severe. “And there’s a reason for that, and that reason is because what we saw yesterday is the second incident in a month.” She added: “Our security and intelligence services prevent all sorts of acts, day in, day out. “And of course, they understand the landscape, they see context, they see all sorts of things that keep our country safe and secure every single day and that work will continue.” Hospital explosion motivation ‘yet to be understood’ Head of Counter Terrorism Policing North West Russ Jackson said the passenger appeared to have made an improvised explosive device which caused the explosion. He added that while the motivation is “yet to be understood” the explosion “has been declared a terrorist incident”. Officers investigating the taxi explosion “cannot at this time draw any connection” with Remembrance Sunday events near the hospital, Mr Jackson said.