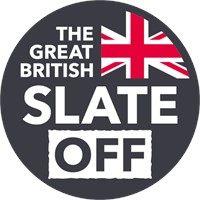 Jordan Maley, a slating apprentice from South Lanarkshire College (SLC) and currently working at Owens LRJ Roofing, has won the inaugural ‘Great British Slate Off’. Jordan was one of six student slaters from colleges across the country who competed head-to-head at the NFRC competition on 9 and 11 November 2021 at the Centre for Roofing Excellence (CoRE) in Hereford. The slaters, who had each won initial heats at their colleges, had to show their skills in accordance with a strict specification and within time constraints. They were judged by NFRC’s National Judges and IFD mentors, Bob Coutts and Matt Timby, who were looking for craft knowledge, hand skills, precision and time management. As the winner of the award, Jordan will receive an all-expenses paid trip to Spain with his tutor courtesy of Cupa Pizarras to visit one of their quarries, as well as a free City & Guilds Traditional Basic Leadwork craft course, courtesy of the Lead Sheet Training Academy (LSTA). He will also be awarded the Mason-Elliot Award by the Worshipful Company of Tylers and Bricklayers and will be considered for the GB team for the IFD World Championship for Young Roofers. The competition was kindly supported by the following organisations: • Cupa Pizarras • DuPont Tyvek • SR Timber • Hambleside Danelaw • LSTA The following colleges and training centres participated in the competition: • Bolton College • Leeds College of Building • Eastern Region Roof Training • South Devon College • Fife College • South Lanarkshire Commenting on the prize, Jordan’s tutor Ross Hepburn, from South Lanarkshire College said: “Firstly, I would like to say a massive congratulations to Jordan on his performance last week—the standard of work on show by all competitors was fantastic, and this must have been an extremely difficult task for the judges. Jordan showed that all his hard work, both in college and on-site under guidance from his employer Owens LRJ Roofing and the SLC Roofing Department, has been well worth the effort. He added: “Here at South Lanarkshire College, we encourage all students to participate in competitions in all trades. To win the Great British Slate Off has certainly been a highlight of a trying past few years. Now we are hopefully nearing the end of the pandemic I hope competitions like this will become a normal part of the college calendar again as they are certainly worthwhile in allowing students to showcase their work across the nation. He concluded: “I would like to say a massive thank you to Simon Dixon and the rest of the NFRC team for organising the event, Andy Rowlands at CoRE for allowing the use of his training centre, and both judges Bob Coutts and Matt Timby who showed a high level of professionalism throughout the competition. Events like these would not be possible without the support of the event sponsors, Cupa Pizarras, Hambleside Danelaw, SR Timber, DuPont Tyvek and LTSA, so a massive thank you for getting involved NFRC’s Training Manager, Simon Dixon commented saying: “Due to the lack of a SkillBuild/World Skills competition for 2021, NFRC’s Technical and Training Team, including National Judges Bob Coutts, Matt Timby and Andy Rowlands made plans for competition continuity. He added “Andy Rowlands offered his training facility, Centre of Roofing Excellence at Hereford for the venue. The colleges and training centres were keen to hold their own internal heat and put forward their winning student for the finals. Alan Bessford from Newcastle College came up with the competition name but sadly was unable to participate this year. He concluded “The marking and final scores were extremely close, as you would expect for young roofers of such high calibre, a tough job for Bob Coutts and Matt Timby to judge. My congratulations go out to Jordan and his tutor Ross—this is a fantastic achievement. My personal thanks also go to Andy and his team at CoRE, to the whole NFRC team, the sponsors, the tutors and the competitors themselves and their companies for releasing them to participate. Hannah Wall, UK Marketing Manager at Cupa Pizarras said: “The Great British Slate Off was a really well-organised event by the whole team at NFRC that gave roofing apprentices the opportunity to showcase their skills at a competitive event after not being able to do so for some time. She added: “All the roofing apprentices performed extremely well under the pressure of the competition to deliver incredible examples of natural slate work. It was great to see the six candidates take advantage of the creative element of the tasks to try something different and produce beautiful designs. Both the college tutors and the apprentices should all be incredibly proud of what was achieved over the course of the event. We look forward to supporting events like this in the future.” --ENDS--