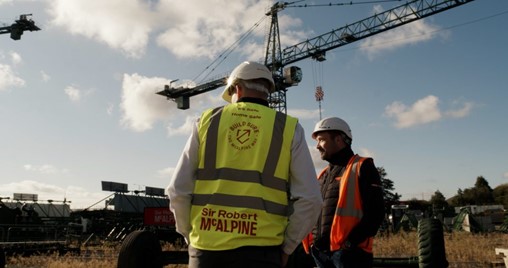 Sir Robert McAlpine has announced a number of new initiatives to decarbonise its activities and set an emissions reduction target in line with a 1.5c future, as a new signatory of the UN Race to Zero campaign As part of the decarbonisation target, the construction and engineering company has also pledged to no longer purchase diesel and has begun to transition to a hydrogenated vegetable oil on all its sites. A new Ultra Low Emission Vehicle (ULEV) car scheme has also been announced for all employees, starting this month. These initiatives will significantly reduce Sir Robert McAlpine’s scope 1&2 emissions, allowing the company to concentrate fully on understanding and reducing its scope 3 emissions in line with its commitment to the Science-Based Targets initiative (SBTi). With the help of energy specialists, Aggreko, Sir Robert McAlpine’s team have undergone successful trials to evaluate low impact technology and more sustainable temporary site solutions. Solutions include assessing the viability and scalability of load-on-demand solutions, battery-assisted generators and the use of HVO. To address its indirect scope 3 emissions and help its clients achieve carbon reductions, the company has also trialled and rolled out a whole life carbon calculator for the business, which will further support their mission to reach net zero. Following its commitment to the SBTi earlier in the year, Sir Robert McAlpine has now pledged to set verifiable science-based targets which align to the 1.5C warming scenario. These commitments will be independently assessed by the SBTi to ensure that Sir Robert McAlpine’s corporate emissions reduction targets are in line with what climate science says is needed to meet the goals of the Paris Agreement. All members of the SBTi must meet stringent criteria to credibly race to zero emissions and will work to deliver a healthier, fairer zero-carbon world. ‘Securing our future’ Simon Richards, head of sustainability at Sir Robert McAlpine, commented: “They say that actions speak louder than words – now is the time to live by that. “Whilst 2050 seems like a long way away, the magnitude of change that we have to enact, means that it will be here fast. “When it comes to climate resilience, I am proud of what we are doing, putting in place things today that will deliver meaningful change and do our bit to secure our future.” Calling on business leaders to adopt net-zero plans Sanda Ojiambo, CEO and executive director of the UN Global Compact, one of the SBTi partners, said: “The climate emergency has led CEOs to act urgently and decisively to set science-based emissions reduction targets for their companies in line with a 1.5°C pathway. “The movement to transition to a net zero economy by 2050 is also growing rapidly, and we call on all business leaders to adopt concrete plans to realise this goal.”