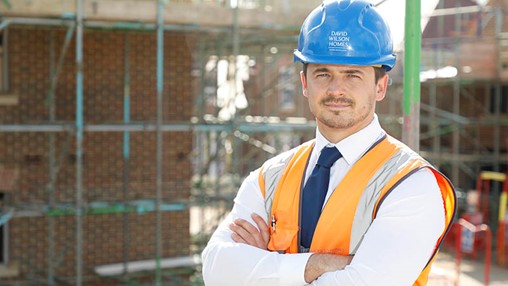 Housebuilder David Wilson Homes recognises the unique skill set that former members of the Armed Forces can bring to the construction industry – and its latest recruit, former Royal Marine Mark Wheeler, is settling into his new role as a trainee assistant site manager at Kilners Grange in Tongham, Surrey. After 11 years spent serving his country around the world, Mark, 32, had already made the transition to civvy street and was working as a plumber when he heard about the Armed Forces Transition Programme run by David Wilson Homes and sister company Barratt Homes. After two separate ex-service friends talked to him about how the scheme had helped their careers, Mark decided to apply. “The opportunity really appealed to me,” he said. “I already had a good trade plumbing, and knowledge of the building trade, but this position will enable me to keep moving and progressing, and I haven’t put any limit on my future ambitions!” After applying to the programme last summer, Mark was accepted onto the course earlier this year, and will spend 12 months learning about different aspects of site management while working towards an NVQ Level 4 in Construction Site Supervision, before becoming a fully qualified assistant site manager. “I’ve been getting involved with a bit of everything on site,” he said. “Initially I was working with the customer care team, then I moved onto the various build stages, preparing plots for building inspections, health and safety and general running of the site. I have found I have plenty of transferable skills – particularly people skills and the discipline that comes from the military – and of course my plumbing skills have come in useful.” One part of the job that has particularly appealed to Mark is the opportunity to train as a mental health first aider. “Good mental health is really important in the military, so I was very keen to volunteer,” he said. Mark had previous experience as a TRiM practitioner, which stands for Trauma Risk Management, a system which helps people to support their colleagues to minimise stress-related mental health issues, so again he was able to make good use of his transferable skills. Kimberley Benson, sales and marketing director for David Wilson Southern Counties, commented: “Our programme is designed to make use of all the vital skills and qualities that people learn in the military environment and help use them in a new career. Former members of the Armed Forces bring leadership, drive and project management skills which are extremely valuable in the construction industry.” Mark moved from Somerset to Guildford to take up the role and is now working on site at Kilners Grange, a small development of 100 two- to five-bedroom homes in Tongham, a small Surrey village close to Guildford and Farnham. When Mark arrived, construction was only part way through the first phase, but they are now working on Phase Two and expect to finish on site next summer – and the popular development is already 85% sold. “My favourite part of the job is being busy,” he said. “There’s always lots going on and no time to sit around. In the military, every day was different and there was always lots going on – and it’s the same in construction.” armed forces assistant site manager construction careers David Wilson Homes Kimberley Benson Mark Wheeler South East trainee