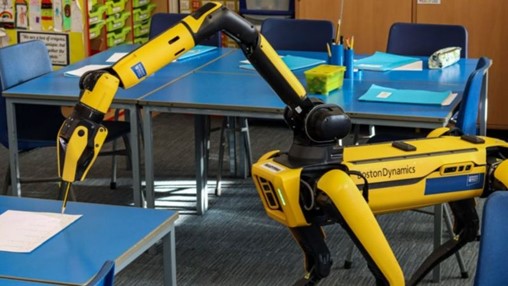 More than 1,000 primary school pupils from 39 schools in Scotland entered a competition to name this robot dog. What do you think the winning name was? The name 'M.A.R.T.I.N.', submitted by the P6/P7 class at a primary school near Edinburgh, was crowned the winner. It's an acronym with each letter representing a word, and it stands for Mechanical, Artificial, Remote, Technological, Intelligent, Ninja. The dancing robot is the first of its kind in Scotland and was made by a massive company called Boston Dynamics. Check out these amazing robots too! It toured the winning schools along with a team of robot scientists, as part of a special project by the National Robotarium, Heriot-Watt University and the University of Edinburgh, to inspire and educate young people about robotics and AI. The aim is to drive engagement and broaden access to cutting-edge technology, with a programme to build future skills and encourage more young people from a wider range of backgrounds to consider starting a robotics career. M.A.R.T.I.N. has since been joined at the National Robotarium by a second robot dog - called MA.R.T.I.N.A. with the final 'A' standing for its robotic arm. The two robot dogs have been fitted with specially created hardware to carry out research into how robots can support humans in offshore energy inspection, construction and disaster recovery. Pupils were also encouraged to design a robot that could help humans in the future, with 'Fire Bot' by Cole and 'Care Taker Bot' by Sophie chosen because of their detailed robot features and ability to help people and to solve global challenges The newly named M.A.R.T.I.N. and MA.R.T.I.N.A. toured the winning schools with a team of robot scientists from National Robotarium. The visits were accompanied by a workshop on hazardous environment research. Lottie aged 12 said: "The robots are really interesting. It's amazing to have these robots to help make everyone safer, because people won't have to go into dangerous situations. It would also make work a lot more fun if you could get to control a robot." Mrs Craig, a teacher at the school said it had been brilliant to see the kids "so captivated" when the robot visited. Professor Petillot, co-academic lead of the National Robotarium, said: "Events of this type are essential to build understanding about how robots will work together with humans going forward. "I'm excited to see how the next generation will embrace technology and evolve it with the new ideas they will bring to the field."