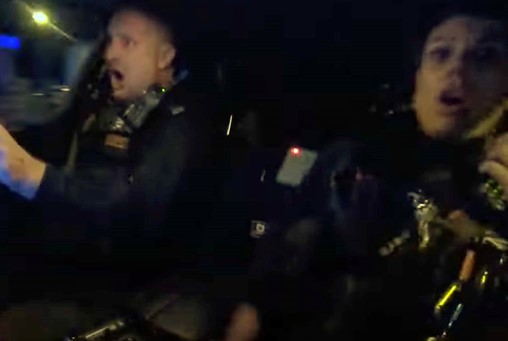 A high-speed chase through Mapperley is featured on tonight’s episode of Channel Five’s Police Interceptors. Two men landed jail sentences as a result of the pursuit. The episode shows officers patrolling the streets of St Ann’s when they spot a Peugeot 607. Following intelligence, they went to investigate and get a closer look at the car, but it soon took a sharp left onto Hungerhill Road and took off. Having followed the car and seen this, cops switched on their lights – but the ‘blues and twos’ had no effect on the driver, who refused to stop. It was then that trained tactical pursuit officers, including PC Rob Eley, were called in to bring the driver to a stop. The driver reached speeds of 70mph, including through a 20mph speed limit zone, and narrowly missed a police car in his desperate attempt to evade officers, so it was a priority to stop him. Despite their efforts, he continued to hurtle around these built-up areas so, using their training, Rob and the team began to work on the tactics to bring the pursuit to a conclusion whilst pulling back to monitor the driver from further away, looking to decrease any additional risk. As the car reached the junction of Mapperley Hall Drive and Woodland Drive, Mapperley, the driver lost control. Having reached a dead end it tried to reverse – but the interceptors were prepared and quickly boxed it in. They also quickly detained the man following the incident at around 1.25am on 1 September 2020. Craig Ingle, 48, of no fixed address, was sentenced to 12 months in prison and disqualified from driving for five years after appearing at Nottingham Crown Court on 15 January 2021. He was found guilty of dangerous driving, driving without insurance and driving without a licence. PC Eley said: “Speed limits are in place for a reason, and, in particular where it is a 20mph zone it is likely because it is a highly built-up area which sees lots of footfall. “Ingle took many, many risks driving how he did and travelling at such speeds and we are thankful this was in the early hours of the morning where the roads were slightly quieter and that no one was injured. “When we were called up for support, it was imperative we acted quickly. Our priority is to keep members of the public safe – and the longer a pursuit goes on, the more risky it tends to get. “So, as a team it was really important to work together to keep sight of him and bring him to a stop as soon as possible and prevent any conclusion that could potentially be disastrous. We saw him come towards us as the pursuit came through the Forest Fields area and we worked on our tactical plan to stop him. “He lost control as he came to a dead end and we took that opportunity to stop him for good. “We boxed him in and I took the initiative to block off the driver’s door to stop any chance that he would get away on foot. “Shortly after, he was detained. It was definitely a relief when we got to stop him as he was showing a complete disregard for us and the road. It’s also pleasing to hear that he got a custodial sentence. “It’s a reminder to anyone who tries to escape officers that we are highly trained tactical pursuit drivers and when there’s a team of us following them its only a matter of time before their luck runs out.” Tune in to Channel 5 at 8pm to see all this and more on tonight’s Police Interceptors. Subscribe to our weekly newsletter