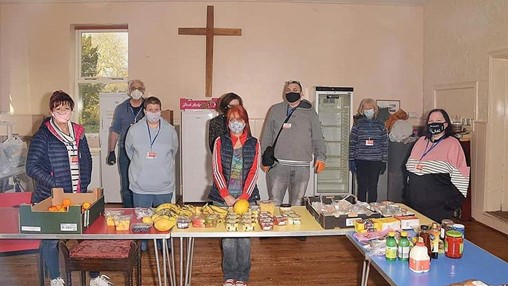 Volunteers at a food bank in Caistor are urgently appealing for donations after helping 1,500 adults and 920 children since opening in February. Brian Milne, volunteer manager at Caistor Food Bank, has been doing charity work taking school dinners to children during the holidays in Grimsby and Cleethorpes. This led to him being contacted by Dave Wells from the Grimsby-based We Are One Foundation, which provides support for people facing food poverty including the homeless, those in hostels, the elderly and families in financial distress. He told Brian about a woman with five children moving to Caistor who was in need of support, and it was suggested that he should open a food bank in the town. Within a week Caistor Food Bank opened at the Methodist Church Hall on Chapel Street on February 27. Caistor Food Bank is open between 11am and 2pm, but can take emergency food parcels when required outside of these hours. It is managed by Brian, his wife Sue, and fellow volunteer Thirza Dixon, who are part of a team of 25 that have delivered over 1,000 food parcels since February. However, the need for supplies at Caistor Food Bank is now greater than ever. From donated food and basic toiletries to money and volunteer time, there are plenty ways people can help. Volunteers said that there has bene a reduction in Universal Credit, and a notable increase in job redundancies following the end of the furlough scheme, so they are doing what they can to help. Brian told The Lincolnite: “It feels like a constant battle. We have seen the number of people coming to us continue to increase, and our volunteers are working tirelessly in an effort to make sure that no one in our region goes hungry this winter.” He added: “It is really important for Caistor. When myself and my wife had coronavirus and norovirus we had to temporarily close for a week in the summer. In that time we were still getting calls as people depend on us, and we had to keep getting food to people via the other volunteers.” People can bring in donations during the food bank’s opening hours or put them in the allocated baskets at the Lincolnshire Co-op stores in Caistor and Keelby. People can self-refer to the food bank with a few bits of qualifying paperwork, or be referred via social services, GPs, schools, housing associations, or many other partnership organisations. Anyone requiring emergency food parcels outside the food bank’s opening hours should call 0771 4624608. Food donations Food donations are needed now more than ever, with a definite need for tinned, longer shelf-life, items such as: Tinned vegetables Tinned potatoes Tinned sandwich meats Toilet rolls Tinned tomatoes Tinned ravioli Tinned hot dogs Biscuits Crisps Dilutable squash UHT Milk Butter/margarine Spotted an error? Please notify us by selecting that text and pressing Ctrl+Enter.