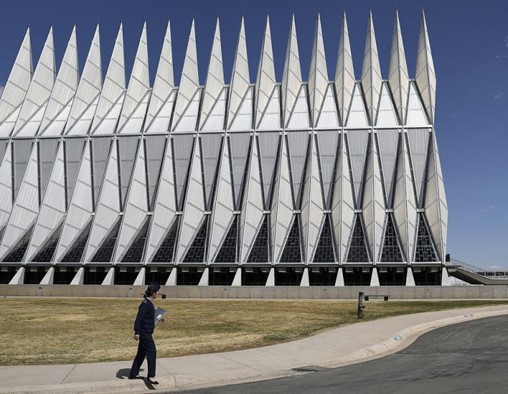 The Cadet Chapel at the United States Air Force Academy in Colorado Springs is poised to undergo a US$150 million repair that will take many months to complete due to contractors encountering more asbestos than projected, as well as other unexpected problems. The restoration began two years ago and has necessitated the creation of a massive white temporary cage around the famous 150-foot-tall aluminum skyscraper. This “cocoon,” as Boyle refers to it, allows personnel to methodically address the legacy of a thrifty design choice made during the building’s initial construction in the 1950s and early 1960s. Also Read: Plans for Colorado Springs’ tallest mixed-use tower unveiled, Colorado Walter Netsch Jr., the chapel’s architect, originally planned an extensive gutter system to drain rainfall that fell onto the church. But, according to Boyle, that plan was scrapped in favor of caulking all of the seals on the building’s network of interlocking outside aluminum panels to save money. The caulking failed to withstand the elements of the Pikes Peak location, and the chapel has had leaks from its inception. Extensive water damage over the last six decades prompted the repair, which includes the removal of over 20,000 brick-sized stained glass blocks and every aluminum panel. “We were aware that there was a lot of the chemical in this structure. We just couldn’t get into all of the locations where it may be present to test “said Duane Boyle, the academy’s campus architect. He also stated that dealing with the further asbestos pollution discovered in the chapel will cause the project to be delayed past its intended completion date of 2023, but he is unable to speculate on how much longer it could take. “I believe it would compete as one of the most intense and complex historic restoration initiatives in history,” he added. Many of the artifacts that were formerly inside, from the seats to the facility’s two large church organs, are also being totally repaired owing to water damage or neglect.