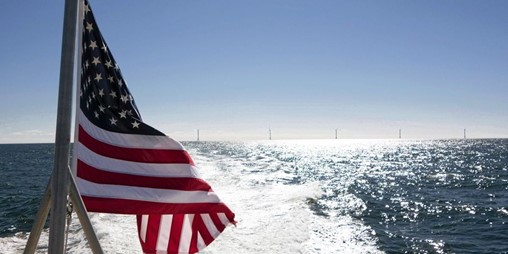 For the US wind industry, 2022 starts with a mixture of anticipation and trepidation on land and sea alike. With a green-minded president in Joe Biden and some of the world’s most ambitious targets at federal and state level, the foundations for American green power have never been stronger. Yet as an in-depth analysis by Recharge reveals, the US onshore wind industry is actually heading for a slower year in 2022 as expiring federal incentives, Covid and supply chain issues take the edge off the highs of the last few years just as Biden needs the sector to be ramping upwards. Whatever the short-term challenges, the US onshore sector sent a powerful message of what’s possible when Pattern Energy finished the gigawatt-scale Western Spirit complex in New Mexico. For American offshore wind, analysts underlined to Recharge that 2022 will be a pivotal year when – last-gasp legal challenges notwithstanding – two commercial-scale projects will finally start construction. And as our in-depth look at the year ahead offshore drove home, while questions remain over the supply chain’s ability to keep pace and the preparedness of the transmission system for the coming boom, we are, thankfully, long past the point where anyone doubts the place of wind at sea at the heart of the future US energy system. That was further underscored when New York governor Kathy Hochul trumpeted the state’s ambitions as an offshore wind leader with a $500m pledge to back the supply chain and manufacturing, and news of a new 2GW procurement round. Looking deeper into the future, Doug Pfeister of The Renewables Consulting Group outlined in an exclusive opinion column how the massive Central Atlantic zone earmarked by federal authorities last year could eventually play a huge part in the sector’s future. Whether in the US or elsewhere in the world’s seas, the availability of installation vessels looms as a key potential bottleneck for offshore wind growth. The issue is not just one of numbers – the vessels also need of a scale to handle the supersized turbines that the sector is relying on to meet its capacity targets. Fortunately, the shipping sector is stepping up the pace, as shown by milestones for two massive new vessels reported by Recharge this week. China has already taken the mantle of largest offshore wind market from the UK and is set for explosive growth over the next decade, leading Huadian Heavy Industries to lay a potential six-year charter claim on a vast new vessel capable of handling turbines up to 20MW. Innovation will be just as crucial as scale in the coming offshore wind boom, and Jan de Nul is now well on the way to delivering this year its innovative ‘no legs’ offshore wind vessel Les Alizés, which is said to offer new options for efficient installation in challenging conditions, and will be used first by Orsted off Europe. The latest reports add to recent news on innovations for installation of floating wind arrays advancing in China and in the US respectively. It would be too easy to say 2022 will be the year of hydrogen – 2021 could claim the same, and in reality we are just at the start of a decade in which H2 will rarely be out of the energy headlines. Indeed, the new year started much as the last one ended, with Recharge already covering developments such as plans for pilot green H2 production by Vattenfall at its Aberdeen Bay wind farm, a huge electrolyser factory joint venture in China involving Cummins of the US and Chinese oil giant Sinopec, and $1bn of US government loan support for so-called ‘turquoise hydrogen’. We also reported how three major Japanese corporations including car maker Toyota are teaming up to produce clean hydrogen from household and industrial plastic waste by 2025.