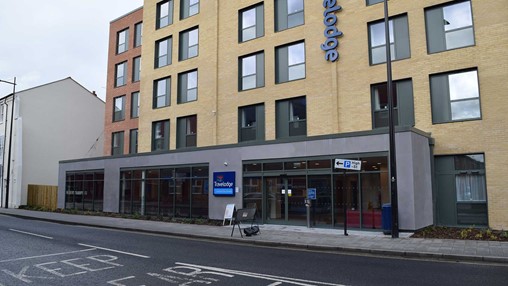 Construction of the northern section of the proposed Spalding Western Relief Road is officially underway, with the full project expected to last until autumn next year. Main construction works officially started on Monday, January 10 for the relief road, which will stretch for 6.5km and link the A1175 and A16 to the south and east of Spalding to the B1356 to the north, via the B1172 Spalding Common. The whole project is estimated at a cost of £109.5 million, but that is likely to increase if material and labour costs are still high when the south and middle sections are progressed in the future. It is anticipated that the northern section will be fully constructed by autumn 2023, with nearly 3,000 underground pile foundations being installed to support the building of a new bridge over the Lincoln to Peterborough rail line. Works will only be carried out in the daytime and special hoarding will be used to lessen the noise impact for locals. The Spalding Western Relief Road has caused controversy galore since plans were announced, as Lincolnshire County Council were forced to apologise in 2019 for leaving residents “in limbo” over the future of their family homes. As well as this, in January 2020 nine homes in Spalding were spared from demolition by senior LCC councillors, who called for the route to be changed in order to save residents’ homes. The aim of the project is to support sustainable housing and commercial growth in South Holland, reduce delays and improve journey times, reduce congestion in Spalding town centre and encourage walking and cycling in the centre. Cllr Richard Davies, executive member for highways at Lincolnshire County Council, said: “We’ve officially started construction of the northern section of the new Spalding Western Relief Road. “Now that work has officially started, the team will be focusing on building a new five-arm roundabout on Spalding Road, a T-junction next to Vernatt’s Drain and a new bridge over the Lincoln to Peterborough rail line. “Although there shouldn’t be any significant disruption on local roads until this autumn, some occasional temporary traffic management will be required for utility diversion works. “Two Plank Bridge, its connecting footpath and the footpath on the Wygate estate across the rail line are also now closed to ensure the safety of everyone that uses them. This is while we replace the old wooden bridge and carry out large-scale engineering works along the path as part of the relief road project.” For full details on the construction of the Spalding Western Relief Road, visit the Lincolnshire County Council website. Spotted an error? Please notify us by selecting that text and pressing Ctrl+Enter.